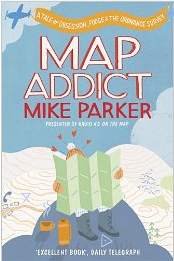 Phil: Early on in our writing process, we were establishing some characters and Ms Nolan produced a wonderful description of how one of the main characters met his wife. He is a buffoonish slightly aristocratic chap, she is a good, solid, tweed clad, wellie wearing gal more interested in breeding cattle than children.

The action took place at a hunt ball and involved comedy clothing, projectile vomiting and some hot portaloo action. It was funny, very funny indeed, but as a well brought up lad, I wondered if it was a bit over the top. Think the more outrageous Tom Sharpe stuff rather than fluffy Mills & Boon. Maybe I just don’t get invited to those sort of parties, but I have been in the odd temporary toilet and never found them enticing. Is it different for country folk ? I don’t recall anyone in The Archers going all gooey at the smell of Elsan blue rinse.

Then I read the excellent book “Map Addict” by Mike Parker (no relation) which contains this passage:

I knew I had to take a trip to Rutland the day a mate told me that it was the wife-swapping capital of England; the Land of Rut indeed. My friend lives about fifteen miles away over the Leicestershire border, and told me of Rutland residents in her social circle who regularly find themselves at parties where a fumble in the hot tub is just for starters. These Rutlanders are commendably lacking in coyness, as you’d expect from people who spend large parts of their lives hanging around in the company of toms of quivering horse-flesh and randy dogs.

Lack of prudery, and an honset get-on-with-it lustiness, are undeniably central facets of the true rural existence – not the Move to the Country version, with its Chelsea tractors and stripped pine, but the real, horny-handed version, more Massey Fergusons and stripped housewives. Rutland, true to its agricultural heritage, just like to get ’em off and get on with it.

One response to “Rutting in Rutland”