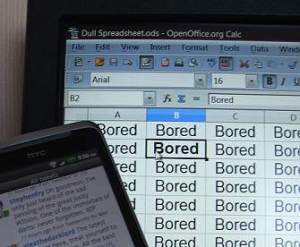 Phil: In a word; procrastination.

Last weeks post on Twitter by Candice set me thinking. First, it made me think “I suppose I ought to have a go at this Tweeting Lark” and so now you can follow me as @Practical_Phil or at least you can once I’ve read the instructions and worked out how to do it properly. Two tweets so far but both were celeb filled, so move over Stevie Fry.

Second, and related to reading the instructions, was a pondering about the very nature of social media and why it is so succesful. The anthropologists amongst you will probably say something about humans being social animals and living in groups and sharing experiences. Very nice and oh so scientific but I suspect you are wrong. There is a bigger factor at play and it’s this: Work is boring.

Let me take you back to the early days of the interweb. Before Facebook and Twitter, before even MySpace (yes there was such a time) the killer site everyone looked at was BBC News. According to a conference I attended once where the BBC webmaster was speaking, even in the dark days of the late 1990’s, this site was receiving trillions of visits every day. That’s from a time when home connections were dial-up, most people didn’t have the web on their desk and we all talked about being able to use this new-fangled thing called WAP on our mobile phones in glorious black and white. Despite the difficulty accessing the content, when you got the chance, it’s where you went.

Does everyone need to keep up with the news on a minute-by-minute basis ?

No they don’t. But when faced with something in Excel, the urge to go and read something new, and the BBC has always made a point that the website is constantly updated, was very compelling.

Then along came blogs, of which the most succesful were also streaming out new content continuously. And then Facebook where you looked at a stream of new status updates from your friends, even if they were people you’d met once and would never see again. Finally Twitter boiled Facebook down to its essentials. A constant vomit of drivel from all corners of the world and yet because this is new and shiny we lap it up.

Look at it this way. What is more exciting, checking a sheet of sales figures or reading that Peter Andre has eaten a digestive biscuit ? No contest.

Which is good and bad news for us writers. On one had we are much in demand as everyone needs new content. On the other, everyone reckons they have the skills of Shakespere. The result is a sea of stuff for our readers to swim in. There are multiple channels to be attended to. You could see these as opportunities – why not give your character a Twitter account and tweet as though they were real. Could you even tweet the story from their point of view ? You also get more tools to use in a story to move it forward. Kate vs The Dirtboffins relies at one point on e-mail and the sort of conversations that are had using this channel.

Just remember that there are more bored people stuck in jobs they hate with plenty of web access. Crack that market and you’ll be made for life.

Anyway, must go. I see Holly Valance has seen some sparkly shoes…

One response to “How social media works”