Is a giant cabbage funny or wierd ? 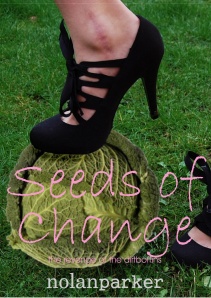 Phil: I’m puzzling over this whole 5-page challenge thing. With a long training course I’m taking part in turning into a software demo thanks to a lack of Internet, there has been time for my mind to wander…

Initial ideas revolved around the scene involving a giant cabbage. We (well I anyway) even liked it so much that an early version of our book cover featured the vegetable (New readers please note that we originally touted the book with the title “Seeds of Change” and then decided this wasn’t funky enough to leap from the slush pile).

I think cabbages are nearly as funny as sprouts. They certainly taste and smell just as horrible. Thus, when we needed a giant vegetable, a cabbage it was. Not a carrot, that’s just rude (see also marrow, parsnip and anything else slightly willy-shaped) or a banana which is technically a herb apparently.

But, can you just spring a giant brassica on unsuspecting readers ?

I fear not. When you are well embedded in nolanparker world – which is not a new theme park but could be in a few years – then anything can happen and a giant cabbage makes perfect sense. At the start of the novel, perhaps we still need to be a bit gentle with the reader. We are funny not weird, and I’m pretty certain enormous veg aren’t chick-lit, so as far as that plan goes, I’m as stuffed as an artichoke on a middle-class dining table.

But, then I think a bit more. The scene I’m thinking of is described as happening after another event involving in a ladies toilet. We don’t actually say much about the lavatorial incident, but if I flesh it out we end with the cabbage and leave the reader dangling for a while before picking matters up a few chapters later. It’s even possible to drop hints that will make people say “Oh, so THAT’S what they were on about at the start.”

So, that sounds more like a plan. I’m training again tomorrow, time to do some more thinking.

2 responses to “Is a giant cabbage funny or wierd ?”