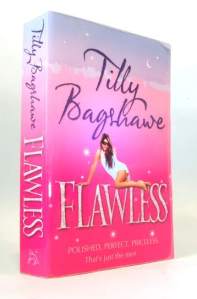 Phil: For chick-lit book 2 I’ve been reading Flawless, a book you can judge by its cover. A cover I wasn’t going to be seen opening in a public place.

First up, the author’s name. Once upon a time Tilly Bagshawe would have been the second under scullery maid in a posh house. Cook would have shouted “Tilly Bagshawe, I want t’hearth blacked until I can see my face in it.” only to receive the reply “I’m sorry Cook but I have to go upstairs for a good rogering by Squire Simkins and you know he doesn’t like me to be covered in hearth black. Says it proper puts him off his stroke.”. Now she writes glossy novels. That’s female empowerment for you.

Second, the cover is shiny pink and purple. The authors name is as big as the title and in a scripty font. To top it all, there is a lady on the front in a pose that can’t have been comfortable but a photographer thought was both glamorous and sexy. This is chick-lit big time. Chick-lit that is to literature what Dynasty was to drama.

Anyway, the plot. This concerns Scarlet Drummond Murray, Andy’s less well-known sister (I might have made that bit up) an ex-model who now designs gemstone jewelery whilst worrying about the lives of people digging diamonds with her international campaign “Trade Fair”.

The male leads are Jake and Danny Meyer, a pair of rough but lovable cockneys (pronounced cock-N-eys) who deal in diamonds. There’s also Brogan O’Donnel and his wife, a friend of Scarlets, along with her and Jake’s families.

Some stuff happens, Scarlet spends the whole book hating and then shagging then hating then shagging again before finally marrying Jake. Danny runs off with big, bad Brogans wife and has a baby. That’s about it. 483 pages.

Best line ? “Poor old Hamish. It wasn’t his fault his family were so inbred he’d been left with the IQ of a cow-pat.”

(Second best line – “Leave him alone you bitch, he’s mine!” although that was written in pencil beside the bit where Scarlets friend tries to chat up George Clooney so it might not count)

You’re probably getting bad vibes from me. If not, pay more attention. I’d guess that on a sun-lounger this is a great read. It rattles along well enough but in truth I couldn’t give a toss about any of the characters. Scarlet is written as the sort of person who spend all her time feeling for other people like a 1st year social science student with a large collection of Morrissey CDs. The idea that she spent her time while modelling thinking about the latest Oxfam report because it was “all so superficial yah” didn’t work. In fact, I was mostly on the side of the people who wanted her to shut up.

Added to this, I couldn’t really work out how she made a living. There was the jewelry designing but it wasn’t clear what this involved. Did she make the stuff herself ? Unlikely as later in the book, once her Notting Hill shop has been torched and she’s relocated to LA, there is much e-mailing of designs around the world. This makes me think the “design” is a posh girls doodle that some more talented person has to turn into reality.

In fact the whole premise seemed a bit thin to me. Money seemed no object to anyone – there is much jetting around the world for everyone for a start. Yes, Danny is broke when his business is hammered by a cuckolded husband but you never really believe in any of this. I know it’s only a story and a bit of escapism and perhaps it’s just a world I can’t imagine really existing. Even one of the crutial plot lines, where Scarlets’s brother threatened with being exposed as gay doesn’t ring true. Would a newspaper really make a big story out of “Banker plays for the other team ?” – I doubt it, who’d care ?

Worst of all though, the happy ending relies almost entirely on a deus ex machina. Near the end, up pops a random Aunt who happens to be extremely rich, loves Scarlet, understands Jake and leaps in at the last-minute to sort everything out. The newspaper is paid off, the ancient family estate is saved from disaster when a manager is brought in to run it saving Scarlet from having to do this instead of running her shop in LA and marrying hunky Jake. There’s some other stuff too but I can’t remember what. I do know all the ends are neatly tied up. Everyone gets married and lives happily ever after.

I did begin to wonder at some points if the author had a bad experience with her mother as both matriarchal characters are real monsters. Maybe but I suspect it’s more likely that she based her research on some US reality television and sit-coms. The characters are caricatures, the plot as thin as the aforementioned Dynasty storylines. However, sometimes you want Dynasty and not Chekhov (nerd note: Anton  not Pavel), especially when covered in sun tan lotion and drinking something with an umbrella in it in the same way kebabs trump fillet steak sometimes.