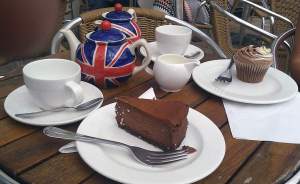 Phil: It’s a couple of years since we started writing The Book and at least 12 months since we considered it finished enough to hand out to test readers. Since then, much cake has been eaten, several attempts have been made to punt the manuscript to agents. We’ve met a few people in the book publishing business. Revisions to the text have been considered.

But, all this has changed recently. While generating enthusiasm for the inevitable editing and re-writing process on Kate vs The Dirtboffins has been difficult, we have become little creative powerhouses in the short story world.

Candice mentioned one of our first efforts “The Cathedral Killer” recently but since then we’ve completed another story and have two more on the stocks going through the process of being refined. Last week we met up, took the photo above, and set ourselves a deadline to each write 1000 words by the following Friday (tomorrow). We had both done our homework by Tuesday – that’s how much we wanted to do this.

Both efforts are completely different to anything else we’ve written, including the other shorts. These little side projects have freed our creative juices a bit. The vague plan is to have produced enough decent efforts to self-publish a collection by Christmas. Some of these will have been entered in writing competitions. At least two will have been picked up for major feature films which I am told will star George Clooney. Hmmmm. Well, we’ll do the book anyway.

The moral of this story appears to be that if you want to write – WRITE SOMETHING. It doesn’t matter what, just bang the keyboard. Yes, you need to plough through the big manuscript but if you aren’t enjoying it, go and write something else for a bit. You’ll need to do all the same processes on the short as the novel, but the pain will be over quicker. If we are anything to go by, it gives you fresh perspectives on the main project.