Talking to a ‘National Treasure’ 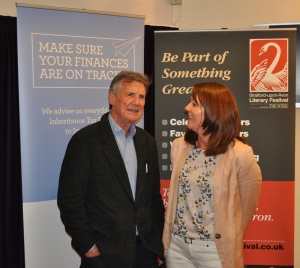 Candice: Phil and I were lucky enough to attend an event at Stratford Literary Festival last week, presented by Michael Palin.  To quote the lady who introduced him, everyone else Pales in comparison (ha ha).

I’ve been a fan of Michael’s for years, as our six form common room would always be full of the sounds of boys chuckling to ‘The Knights who say Ni‘ or ‘The Parrot Sketch‘.  Whether we wanted to be fans or not, we took it in by osmosis.  In fact, it was more the films than the Python TV show as they were on repeat on the TV and we’d sneakily watch them and then spend the next days quoting stuff back.  My one friend took on herself to write down all the words to the song at the start of ‘The Meaning of Life’. Year’s later the same group of female friends who listened at school went to see ‘Spamalot‘ and were quoting sections back to the cast (which they realised as we were in the front row and Lancelot was winking at us as we did it!)

Mr Palin has done alot, from Python to films to some random children’s books and then a travel writer.  It’s quite a varied list, though his presentation his travel shows is always done with tongue firmly in cheek, and I wonder if some times he’s going to break into the Ministry of Silly Walks.

Sitting listening to him talk for an hour, it was less about the art of writing per se but more about the amount of things he’d done. But he gave us snippets of some of the scripts he’d written as well the above mentioned books.  What I didn’t realise he is has actually written two fiction books, the most recent being ‘The Truth’.  As we were running out of time I didn’t get the full gist, but I might have to search this one out. The hour wasnt enough to get in nearly 50 years of experience and anecdotes.  However, he comes across as such a nice chap I could see you walking over to the local pub and carrying on the conversation over a pint!

I’d been set a task by the other half for the evening, as Michael is from Sheffield, the hubby wanted to know who he supported.  Well, while sneaking a cheeky photo, I asked.  ‘United’ was the response, I mentioned Richard was a Wednesday man, but Michael came back and said really either as he always supports his northern roots.  Good answer!

I’m not sure I came away from the event learning any more about writing but I certainly had a good laugh.

2 responses to “Talking to a ‘National Treasure’”