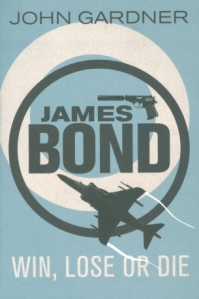 Phil: This post was going to be a review of John Gardner’s James Bond Book Win, Lose or Die. I was going to mention that it’s a sort of blokey chick-lit with war and gun references replacing the shopping and designer brands.

It is of course. There’s loads of detail lavished on weapons systems and recalling military manoeuvres in the Falklands war. It all gets in the way of the plot probably proving that ex-military types are less adept at handling this sort of detail than most chick-lit authors. Since I didn’t grow up reading comics featuring war stories were characters would shout, “For you Fritz, the war is over”, I found myself wishing there was less minute detail on the ammunition.

Needless to say, I don’t have to do this as it’s pretty much what I said when reviewing another book from the same author just under a year ago. That’s the problem with a long running blog, it’s easy to repeat yourself.

Looking at my words, I obviously enjoyed The Man from Brabarossa rather more than Win, Lose or Die. I can understand that because the plot in this one doesn’t stack up. In fact there is a hole big enough to drive a battleship in to. A hole so large, you wonder why no-one thought to mention it before publication.

Spoiler Alert: For a chapter or two, Bond is taken off to a US military base for debriefing. Except it isn’t a US base, it’s a fake set up by the bad guys. Later is turns out that MI6 knew he had been sent there, that it was a fake – and didn’t bother to mention any of this to Bond. Had he known, he’d have spotted the dodgy Wren (who readers susssed out about 10 minutes after he met her anyway) and the climax of the story would have never taken place.

You could argue that this might have ruined the end of the book but not as much as wondering what they heck M and the rest of Bonds bosses were playing at.

That’s not the only plot issue either although this one is possibly more timely nowadays. It seems that nearly everything we say is being recorded both on the telephone and in the street. Computers use voice analysis software to listen for key phrases which prompts experts to listen properly to. This all sounds very like the PRISM listening programme revealed last year by Edward Snowden leaking documents. However, in 1989, I think Gardener was over-egging just how much surveillance was going on.

More to the point, why would the bad guys have a slogan they kept repeating which alerted the security services? I know Bond villans are normally a bit thick, after all why do they always reveal their plans instead of just shooting 007, but this takes dumbness to a new level.