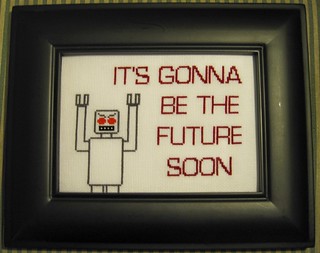 Phil: On Tuesday, La Nolan was inspired by the clocks changing to look to the future. Following on from this, I thought it would be a good idea to bring regular readers up to date with where we are. There’s been a lot of stuff going on in the background while we’ve been rambling about other topics and I’d hate you to think that we’ve been entirely idle.

Starting with the biggie – Yes, we are going to be published. Eshewing the traditional routes to publication of sending dozens of copies of our manuscript to be thrown away by agents, we’re working with a start-up company to get our work out there. Sales will be via e-book but then this didn’t do 50 Shades of Grey any harm did it? More to the point, if you look at the number of iPads and Kindles on trains, even the most traditional reader has to conclude something is going on. Contracts have been signed and feedback received. They are very excited about the book and so when the site launches, we’ll be on there.

In preparation for this, the book has a new cover and we’ve got quite a bit of extra writing to do. Nothing major but the sort of tweaks that you’d expect when someone who isn’t the author reads the story. Since the people we are working with are bang in the middle of the target demographic for the book, this is particularly valuable.

More details will follow in due course. At the moment I don’t want to elaborate too much, partly because I’m superstitious but mostly because I want to you to keep coming back to find out…

With this in mind, Book 2 is slowly taking shape. I’ve found what I think is the perfect location to set it and even have a rough story outline in my head which Candice will be shooting at next week with a bit of luck. Our stories have to be written in two parts. There’s the background action where everything is set and the overarching story arc featuring our main characters and the way their lives intertwine. Having some idea how this pans out in the future will help us tidy up Dirtboffins as well as helping us see the way in the future.

As mentioned on Tuesday, I’ve just come back from the longest flights I’ve ever endured. On my visits to Hong Kong and Australia, I took a lot of photos and there are some really lovely places out there. If the organisers of the Adelaide Literary festival are reading and you fancy inviting over a couple of new British authors, I’m sure we could be available!