Phil: On Sunday I returned from a busy weekend, tired but not enough to go straight to bed. I flicked on the TV hoping to find something mildly diverting that would entertain me without engaging my brain.

What I got was the BAFTAs.

I’m not a fan of awards ceremonies. They normally seem to be a large group of people who earn far too much for what they do spending an evening congratulating each other on being marvellous and allowing us serfs to look on in awe and wonder.

Too stunned to operate the remote control, I watched for a few minutes and realised something else. It looks really, really boring.

If you don’t stand a chance of winning anything then you spend the evening watching people who do. Looking at the number crowded in there, I bet the winners were less than 1% of the attendees.

At this point, I decided I didn’t want to go and sent Candice the tweet above.

It seems she does.

This might not be the problem you might expect. For a start, there are 26 awards and it’s reasonable to think that the film of The Book will sweep the lot. If the table is at the back of the room, that’s an awful lot of walking back and forth and my friend is far fitter than I am. She might need to wear trainers under the big frock of course. 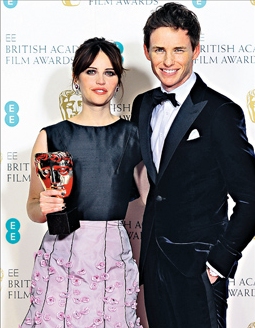 The main issue is that no-one wants me there.

Look at this photo of Eddie Redmayne and his co-star in “The Theory of Everything”, Felicity Jones. As you can see, she is holding the trophy. The only problem is that it’s HIS trophy. She was a runner up and didn’t get one.

The press though, have decided that the person holding the gong should be the pretty one, even if it is rubbing her defeat in her face.

Conclusion: Because all the blokes wear dinner jackets and can’t be poured over by fashionistas who will decide if their outfit is “a disaster” (fashion journalism, your name is hyperbole) they aren’t really important and might as well go down the pub or watch the thing sat on a sofa with a bag of crisps.

Which suits me fine.

One response to “Don’t wanna go to BAFTA”