Wanted: Home for a writer 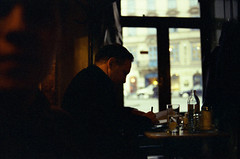 Phil: Working from home, I prefer to write fiction somewhere that isn’t my normal workspace.

While I might have all the facilities to hand, there is also the nagging feeling that I should be doing something that pays the bills, not messing around with stupid ideas of being the next JK Brown.

The problems is, finding somewhere to decamp with my laptop.

This becomes worse when there are two laptops to consider. Our last two attempts at working in Leamington Spa library have been thwarted by a lack of table space. People might say that libraries are dying off but they are certainly popular with those looking for somewhere to spend time driving a keyboard.

Last week, I had a meeting in Rugby and so decided that I’d try their library for a bit. Despite there being lots of tables, I only just managed to bag the last spot on one with power points. It was OK, but I don’t really feel comfortable on a round table in the middle of a room. After a couple of hours, I felt spent and trundled home.

Where do other people write?

I’ve heard of using cafés but that’s going to be expensive if (like me) you feel you ought to have a drink on the go at all times. I can’t countenance the idea of occupying space for half a day on the basis of a single hot chocolate – even if the coffee shop concerned can’t be bothered to pay it’s tax. That and I’d eat too much cake.

What’s needed is somewhere with people around, but people who can be relied on to mind their own business. Pubs, generally, are too busy. Or at least the chain ones where you might feel justified in drinking very slowly are.

After that, I’m not sure there is anything left. I know I should be able to work anywhere but the words flow better if I feel that I’m in the right spot for writing.

2 responses to “Wanted: Home for a writer”