And another thing – did Hitchhikers really need one more sequel? 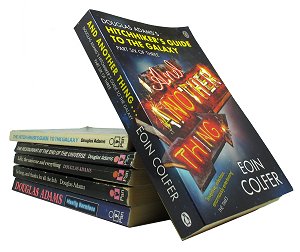 Phil: Some books inspire an almost religious devotion. People read and re-read them. They sit in pubs enjoying alcohol-fueled dissections of the text. Every nuance is chewed over. If there are funny lines, they are quoted until they are no longer humorous.

Once such series is The Hitchhikers Guide to the Galaxy, written by Douglas Adams.

Originally a superb radio show, the scripts then became a 5-part trilogy of books, a pretty good (for it’s time) TV show and the second worst film ever.

At some point, Adams suggested that the 5 part series of books wasn’t quite complete. The last one was a bit bleak and ended with everyone about to die. No problem, he would one day write a sixth book and put it all right.

Now, if you are a publisher who owns the rights to such a series, you don’t let the death of an author put you off. This book has best seller written all over it. You’ll shift a ton of hardbacks too because the hardcore fans won’t want to wait for the paperback.

When it was announced that Eoin (pronounced Owen) Colfer had been signed up to write the final volume, there was always a mention in the press release that Adams wife had approved the choice of author.

Cynics suggested that along with discovering the idea to write a 6th book, she’d also discovered the Mercedes Benz catalogue. That’s the trouble with cult books, people want them left alone. Perfect. Unsullied.

I wasn’t sure. Quite frankly, I was happy with the 5 books and didn’t feel the need for another, so I forgot about it.

That was until browsing through a charity bookshop where I spotted a copy. For a moment, I pondered and then decided that I’d always wonder if I didn’t buy the thing and give it a go.

And now I know. They should have stopped at book 5.

It’s not that this is a bad book, it’s just that if you are taking over a much loved series, you better be brilliant. We want to believe that it’s the original author writing it, not some interloper doing an impersonation.

This isn’t a great book. The story is confusing, the vital footnotes non-existent and I don’t see what it adds other than cash to people’s bank balances.

It’s a bit like watching a bad actor overplaying everything. What we’ve got it Hitchikers turned up to 11. Adams was far more subtle and if I’m honest, grown-up. Colfer made his name in books aimed at youngsters and it shows in places. I don’t envy him the task he faced, after all you are never going to keep everyone happy but that doesn’t make me any less grumpy.

As I say, this isn’t a bad book but I was happy to have forgotten it and I’ll be happy not to add it to the shelves with the others. It can go off and live with someone else and I’ll let the story slip from my mind. In fact a pint of pan-galactic gargle blaster might be just the thing to help with that…