Candice: I’ve been totally useless this week, having promised to write a blog post for three days and not got round to it.  So I have finally found 3 minutes today so get in front of a PC to do the writing.

Its been a great Christmas break with a lot of meeting up with people and playing with their children.  E has made lots of new friends, and given me so many ideas for Birthday presents for her I don’t know where to start. Three years ago I was relaxing, having just finished work for my maternity leave, and was preparing for a night out at a local hotel with a five course meal and then a disco, thinking I’d at least 3 weeks before some one joined us. Little did I know that just a few days later I’d be lying in hospital with an extra member of the family.

For those of you who have birthday’s close to Christmas it is always hard on both sides, you are thinking I’ve got all these things all together, and those of us buying are racking our brains trying to come up with something new. I try and fill the gaps from Christmas or get stuff she will want later in the year (not that we don’t buy things for her across the year anyway!).

This year Father Christmas bought her a dolls house as her main present.  She loves it and has spent every day playing with it.  I asked him for one for her and I thought it would be great for her imagination.  And its really worked.  Through the wall in the morning I can hear her talking to the residents and making little stories up.  I get told off if I move any of the furniture or people around! We even have to include them in the story reading at night.

I loved playing dressing up and creating stories as I grew up and I really want her to learn this as she grows.  It has stood me in good stead,  not just for writing but also at work. I like to think I get more out of life because if my creative brain.

So enjoy your new year celebrations (or to those of you who have already celebrated welcome to 2017) and make sure that you take time to be creative at home, at work and with your children in the new year.  Its more important that staying that extra hour at work, as that won’t be something that you can put in your obituary.

Merry Christmas to all our readers 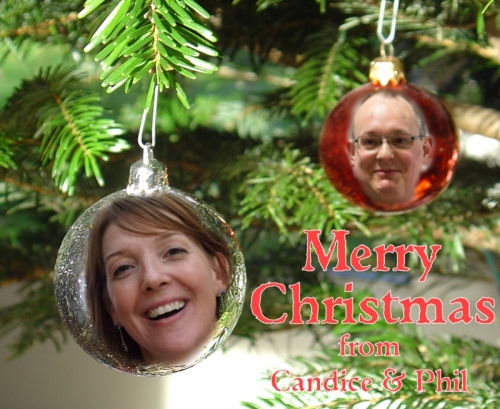 Candice: For my daughter’s first christmas, just before she turned one, Phil bought her a book.  It is a personalised story of the big Christmas rescue where she saves Father Christmas and Rudolph from drowning at sea (not as depressing as it sounds!)

At the time she didn’t really appreciate it, and the same could be said last year.  However, this year while I was sorting out the Christmas stuff I found the book and showed it to her. And suddenly she loves it! We have to read it every night at bedtime and she carries it around the house.

The story tells of a little girl being woken by a noise on Christmas Eve, and finding Rudolph in her kitchen trying to ring 999 but he can’t dial with his hooves.  She makes the call and he reports that Santa has crashed in the sea.  RNLI (Royal National Lifeboat Institution) volunteers jump in to action and rush to save him.

She gets an hug from Santa and an extra treat the next morning from ‘You know who’ to say thank you for her help.

You can personalise the book with your child’s name, sex and skin colour.  She loves to point at the picture and say that’s her and it’s her slippers under the bed, her with Rudolph and so on.

It’s lovely to see her developing so much, understanding what things mean and even being able to read her name – every E we see is E for Erin. But also to finally start to understand what Christmas is about.  We aren’t at the point of waking up in the middle of the night to open presents but I’m planning some fun on Christmas Eve: reindeer food on the patio, mince pies by the back door and a note from Santa at the end of the bed, just like the one in the book.

To buy the book go to the RNLI shop  and help to support an important cause too.

The festive season is upon us and all through the town, people are scurrying around trying to work out what to give to their nearest and dearest.

Well, worry no more. The answer is simple – give them a novel. Here are seven reasons why:

The Christmas Train by David Baldacci

Candice: Phil lent me a book a while ago by an author that I like – David Baldacci.  I’ve read a few of his books and Phil found this on in the dark recces of a charity shop.  He picked it up because it had the mention of a train, I said I’d wait to read it because of the mention of Christmas.

So I picked it up last week.  December was almost here and I thought it wouldn’t hurt to crack it open.  To be honest I’d already had the Christmas tunes on for the little person.  She’s learning some songs for her Christmas play at nursery so we both needed some practice in remembering the words to ‘Away in a Manger’.

To start I wasn’t sure.  The book is about a chap taking a train from east to west coast America to spend Christmas with his sweet heart. Train travel isn’t that popular in the States, everyone flies or drives, but he’s been banned from flying due to an air rage incident so decides to follow the footsteps of his distant relative Mark Twain and take two trains that criss cross the country.

The book was written over 10 years ago and you can tell with some of the technology that is described, it initially distracts from the book, but then the plot gets going.

So, Tom was once a war reporter.  His long time girlfriend up and left him after one to many close escapes and he hasn’t heard from her since.  Who is on the train?  Eleanor, the once girlfriend. In the great tradition of all stories love does not run smooth and she hates him on sight as he still hasn’t worked out why she left him. Just as they are starting to come  together then his girlfriend arrives and friction pushes them to the limit.  Will they or won’t they get together?

There are other fun things happening on the train too.  A young couple have run away from their families to get married, a thief is stealing valuable items and a retired train engineer is watching the skies as he predicts a bad storm is coming. So just as things are calming down an avalanche hits the train and they all get stuck running out fuel and water.

Love conquers all as Tom saves his woman and the train but then the twist appears.  The girlfriend, the marriage are all a sham, set up by the film director employer of Eleanor who knows she is still pining for Tom and wants her to finally get her man.

Initially the book is much too detailed about trains, and I was thinking this was more Phil’s bag than mine.  But once we got over that it’s actually good fun and you want to know what happens.  Some of the characters are larger than life and it gives the story a nice Christmassy feel.  What doesn’t get resolved is the Mark Twain element which is a shame but all in all it gave me a nice introduction to the Christmas season.