Listening to music while writing 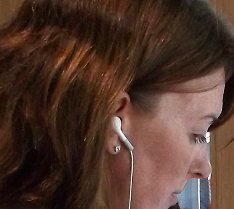 Phil: When team NolanParker meet up, we like a bit of cake. And quite a lot of chat. Sometimes though, we need to get some words on the screen and then everything changes.

Laptops out. iPods on.

The iPods are an essential piece of kit. For a start that stop us talking to each other. Mostly though, it’s all about blocking the rest of the world out and helping our concentration.

We have both spent years of our lives in noisy offices. Environments where you learn to tune things out. I know that I now can’t work in a silent room. The walls seem to close in on me and the lack of noise become oppressive. I like to use this as an excuse for my poor exam performance rather than admitting I’m just a bit thick.

Is this just a comfort thing though? It appears not. Reading this fascinating blog post by author and expert Nicola Morgan, there does seem to be science to back all of this up.

Most interesting is how the choice of music matters. It must be:

Which probably helps to explain why I get more done with the iPod on than the radio.

Even with over a thousand tracks on shuffle, it’s rare that anything surprises me. My memory for music isn’t bad.

The radio, on the other hand, will play tracks that I don’t know so presumably, part of my limited brain capacity feels the need to pay attention. Part of the historic response to danger we developed as cavemen, although more to avoid being eaten than exposed to something new by Harry Styles!