Look after your anoraks 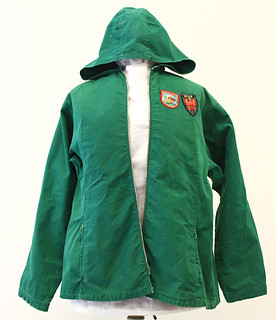 Phil: I’ve been enjoying a bit of catch-up TV recently. I missed out on the BBC show The Detectorists when it first aired, but am nearly at the end of series 1 and looking forward to series 2.

The series revolves around Andy and Lance, two metal detector enthusiasts and their group of friends. What I like most about it is that while the main characters could easily have been figures of fun, they aren’t. In many ways the plots are conventional but built around people’s hobby rather than job. In fact, like most people, their jobs are utterly mundane and merit hardly any attention. Life is lived outside working hours.

Better still, they get to show skill and knowledge, such as Andy knowing exactly how long bones survive in the soil when explaining how a recently discovered skeleton couldn’t be Saxon.

Robert Lloyd of the Los Angeles Times summed it up when he wrote, “Like the ordinary lives it magnifies, Detectorists has the air of seeming to be small and immense at once, to be about hardly anything and almost everything. It is full of space and packed with life.”

Now, you might conclude that I like the show because I’m a bit of an anorak myself. While I have no desire to find bits of metal buried in fields, I do get why this might be interesting to do. There’s nothing wrong with it (OK, archeologists, pipe down) and I’m sure that there is a lot more skill required than waiting for your machine to go ping.

I like the idea that people who it would be easy to turn into the butt of jokes get to be the heroes. Heck, they both have attractive partners and Lance drives a TR7 so living the dream!

Bringing this back to our books, one of my character to look after is Kelvin, our man from IT. He’s a bit of a nerd as befits his role in the firm, but that doesn’t mean he is any sort of joke. Yes, there are a couple of (realistically) embarrassing moments along the way but when you read Kate vs the Navy (out soon!) you’ll find that Kelvin is a bit of a star.

Tracey might say, “Yeah. Kelvin. You know. Bad clothes. Can’t talk to girls. Always there when you need something on your computer fixed.”, but it turns out she was wrong. Very wrong.