Mr Gandy proves that people are more interesting than things 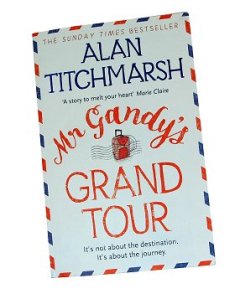 Phil: Another novel from the “heading to the charity shop” pile in our house, Mr Gandy’s Grand Tour has an interesting premise and proves to be a pleasant read.

Tim Gandy finds himself newly compulsorily retired from his graphic design job. His wife has no real interest in him, as do two of his three children. Just as he’s wondering what to do, the wife drops dead. You might think that this isn’t a great start to a story even from someone as warm and fuzzy as the countries favourite gardner, but it provides a catalyst for the rest of the book. Gandy decides to head off to Europe on a tour in the manner of aristocrats from years long past.

Along the way, he encounters lots of special people and has a few adventures – just the sort of thing you’d expect from a novel.

Gandy is a lapsed artist and propelled by his (deliberately) ancient guidebooks, he’s determined to see some of the great artistic treasures on offer. It’s here where the book bogs down a bit with little more than lists of “wonderful” things seen. I get the feeling that like many people he feels that art from hundreds of years ago is automatically beautiful whereas later stuff isn’t quite as worthy. I’ve been to the Louvre and while I agree the Mona Lisa is disappointing, it’s nothing compared to the miles of dreadful religious paintings that fill the corridors leading to it.

Anyway, when not looking at things, the story nips along with the sort of entertaining events that happen in novels but rarely in real life. I’d bet I could spend the rest of my life painting watercolour around Paris without being accosted by a beautiful chanteuse, although in this case, it’s probably a good thing.

Despite being retired, Gandy isn’t old, or at least not properly old so he can be useful and get around. He still wants to do things and not just reminisce. I’ve not read anything with an early retiree as the main character before and it’s slightly odd as you find this is just part of his life and things can and will change in it.

Fun? Yes. Did it make me want to follow in his footsteps? Not really.  Were I lounging on a sunbed (or in the room of a Holiday Inn which is where I read it) though, it’s pretty good.