The Guilty Party by Mel McGrath 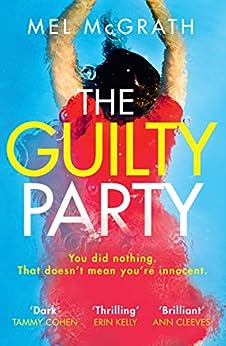 Candice : I bought a collection of books from Sainsburys before jetting off to a lovely holiday to Majorca earlier in the summer.

As it always the way, and what happens when you buy books from a supermarket, the selection was limited to chic lit or crime drama.  I picked this one up because it looked a little different.

The premise is built around four friends who meet at university and then stay connected over the next ten years. Their lives change – one gets married and has a child, one comes out as gay, one becomes wildly successful as a business man, and one gets left behind.  But they have something that ties them all together, they are all serially unfaithful to their partners and keep a record of their relationships by photographing their conquests naked and posting pictures on a shared ‘black book’.  Their appetite for competition and  being sexual predators drives them to stay in touch even though, by the time we enter their lives, they don’t seem to really like or trust each other.

The story is held together with a central premise; they have all been to a festival and on their way home a fight breaks out, in the ensuing melee they see a girl being raped.  The next day she turns up dead, drowned in the Thames.

Meeting a month later one of the party is unsure that the story she has been spun by her friends about the rape is the truth, she wants to tell the police what she has seen but they are reluctant to spill the beans. Why, she is doesn’t know but as the weekend in a remote house unravels it seems that each member of the party had more to do with the deceased than it first seems, and each has something to hide which informing the police would expose.

The book is hard to read as it flits between the view points of each of the four characters, and both past and present, so you struggle to keep up with what is going on unless you read it in long stretches.  It also struggles with empathy, as each character is exposed as someone is isn’t that likeable; the play each one off against the other, and don’t seem to care about anyone else but themselves.

Many years ago I read ‘Gone Girl’ and felt a similar way about that book. I read it to the finish as I wanted to know what happened with the characters, but I didn’t really like any of them or care that much what happened to them.  This seems to becoming a more prevalent style of writing, both in novels and TV shows, where every character is so flawed you don’t particularly want to root for them.  I recently watched ‘The Affair’ and felt this too.  It probably gives a truer version of the world, but I’m not sure I want to see it.  I want escapism not nasty reality.  I can watch the news for that.  I’ve got no doubt however that this book will get optioned soon as it seem to fit with what TV and film producers are looking for these days.  I don’t think I will be watching.