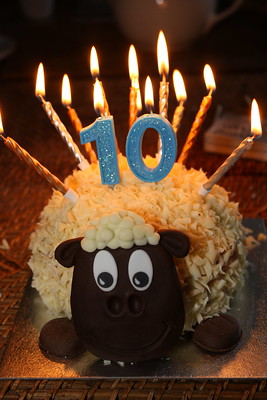 Phil: 10 years ago, the world looked very different. Candice and I were sat at a quango in Coventry wondering what to do with ourselves.

The incoming Conservative government* had decided our employer was surplus to requirements. The age of austerity beckoned. The place was closing down, but we still had to turn up for work under the terms of our contracts. It’s just that there wasn’t anything to do when we got there.

So, we started writing.

Much of our first book, Kate vs The Dirtboffins was formulated during discussions over the desk dividers or during coffee or lunch breaks. How lovely to be able to chat within arm’s length!

Since those days we’ve carried on writing, and just as importantly, chatting. There have been changes of job. One of us has given birth (No spoilers, you can work out who for yourself) and plenty of cake.

We have always been proud of the Dirtboffins, but there has been a niggle in the back of our collective minds that it wasn’t quite polished enough. Yes, people enjoyed the read, but as an author, you want to feel your book is a shiny penny, perfect as can be.

So, to celebrate our birthday as writers, we’ve had it properly proof-read by someone who has taken us to task in a few places. The punctuation is much better (as good as book 2 in fact, thanks again Katherine) and so is the grammar. And one or two timeline issues have been fixed.

All this will be revealed next week when Kate vs The Dirtboffins re-launches with a brand new shiny cover and a few extra pages inside.

Watch this space, the journey continues…

*Strictly speaking, Michael Gove. I wanted to slap him then, and I still do. Not everything changes!

Candice:  Phil has been trawling the options for books and I have been looking through TV and film during this protracted period of self-entertainment.

Though the other day I did manage to get my hands on some more new books as we did a share session in our road, everyone bought their spares out on to the street and put them on a rug and then we took turns to look through the options.  I’ve picked up two chic-lit and a Steven King from that.

Ages ago I saw ‘Good Omens’ advertised on Amazon but wasn’t sure I was looking for that kind of programme at the time.  It’s based on a book by Terry Pratchett and Neil Gaiman and revolves around an Angel and a Demon who have been on Earth keeping an eye on things since the Garden of Eden.

One day the Demon gets told its time for Armageddon to start, he has to deliver a baby who will be the Prince of Darkness and start it all off when he comes of age.  However, he and the Angel quite like their life on Earth and don’t want things to change.  So they go about trying to stop the Prince becoming bad.

I read a lot of Terry Pratchett at University, and found it laugh out loud funny then, though have not read any of it since.  Neil Gaiman, I tried American Gods, his other Amazon TV show but lost it along the way.  (lets not also talk about how he has lost it along the way – um travelling in a Pandemic anyone…).  But this is just the right side of funny, dry and very well played by Michael Sheen as the Angel and David Tennant as the Demon.

In the weird times we live in at the moment there are a lot of books and TV I am rejecting as want something to distract me and lift the mood.  This is doing exactly that.  Its got touches of Python, some very stupid lines and set pieces which make you smile (last night they went to a Paintballing place and the Demon decided to change the guns to real ones).

Definitely a Good Omen to me of some good telly.

Phil: I’m running out of books to read.

Fortunately, a couple of local bookshops have been tweeting for support and promising local deliveries.

At the same time, I spotted that Edd China – Grease Monkey was appearing in paperback. A quick e-mail followed by some money transfer and the order was placed. A week later, a knock on the front door and a paper bag containing the book appeared. The seller being suitably distanced by the time I picked it up. Thank you Warwick Books.

These are really tough times for small shops and those selling books will find it harder than most. Need something to read? Amazon is waiting…

A couple of second-hand bookshops are offering lucky dip selections. You tell them the genre you want, they will pick a boxful for you and deliver or post. A clever idea and one that could see readers discover new writers they will love in the future.

(Incidentally, if you’d like my review of the book, it’s here)