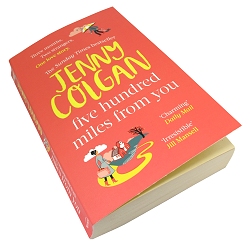 Phil: When you simply need a book to dip into to relieve the stresses of the real world, then something by Jenny Colgan is a good safe bet. Woman’s Weekly call her “the queen of feel-good” and you don’t mess with them.

Five Hundred Miles from You is classic chick-lit. We have two nurse practitioners who for various reasons need to swop the places they work for three months. Over shared patient notes, they fall in love. You know what’s going to happen from the back cover blurb, and it doesn’t matter. We are here for the journey, not the destination.

What I love about this book is that one of the locations is Kirrinfief in Scotland. Loyal readers will remember the tiny town from Colgan’s previous novels and this adds an interesting twist to the story. Characters who were central to plots in the past suddenly, and quite logically, turn up in the supporting cast here.

If you are in on this, it’s all great fun. For new readers, it makes no difference – but they might be tempted to pick up some older novels and read the back-stories.

Aside from the story telling element, this makes a lot of sense from a writer’s point of view. If you are going to invent an entire town full of characters, why discard them after a single book and start from scratch? If nothing else it saves a lot of work.

Personally, I love the idea that the characters have a life beyond a single story. Nina from The Bookshop on the corner is still dispensing books from her van to as a form of literary medicine. I can imagine that she and the others are still having adventures, and all we need to do to find out more, is open the covers of another Scottish-themed book.

Five Hundred Miles? I enjoyed it. Maybe the culture shock for both characters suddenly finding themselves in either London or Scotland is laid on a bit thick, but them I have travelled north of the border a bit and visited London many times, so perhaps I’m just more familiar with both.

It certainly seems odd to read of an ex-soldier who appears not to have visited the capital before, but then I worked with a lady whose squaddie husband managed to travel by train from Kent to the Midlands, including changing in London, and hadn’t found a single place to eat anywhere along the journey. Or at least that was what she claimed, and at the time, even I worked out that saying “He couldn’t find food in London and yet they let him have guns” wasn’t the most sensible thing…