Kate vs the Navy – On Sale now! 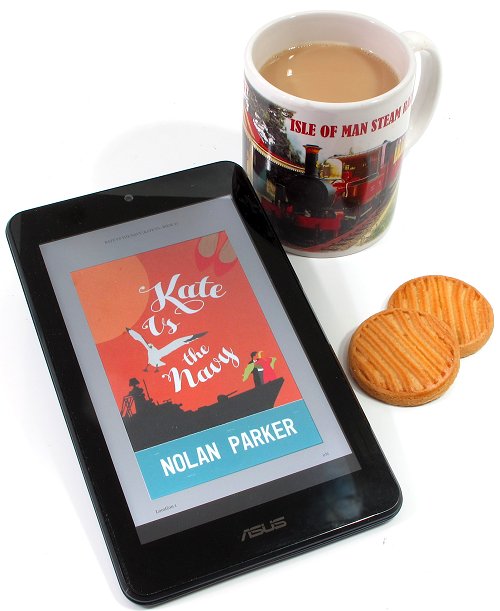 The wait is over. Fire up your e-reader and settle down with your favourite mug full of tea and some biscuits. Then head over to Amazon where you can purchase our second novel, Kate vs the Navy for a bargain price of 99p.

Plenty of high jinks on the high seas and one of the team becomes an unlikely hero. You’ll laugh, you’ll cry, you’ll be desperate to know what happens next…

Kate vs the Navy – Kindle edition

Candice: In the land of marketing speak I don’t class myself as an early adopter, but I do think I follow a close second.  I don’t have an iPhone, but that’s because I prefer the functionality of my Blackberry, not that I havent thought about buying an iPhone.  I’m on twitter, and tweet by my phone, pretty modern.  And last year I bought an iPad for Christmas, and already decided this year that it was time to upgrade to the new one.  Not just for the funky extras, but after a year of using one that only had WiFi we decided we needed a SIM one.  I have recycled though, the parents had my iPad 2 as a christmas present!

So, I thought I would try the whole concept of reading a book on an electronic device.  I downloaded something cheap and not too challenging and off I went.

Initially it was quite funky, swiping the pages across.  But after a while my finger started to hurt, as did my arms from the weight of holding the iPad.  I also got a bit fed up with looking at a screen, as I do that all day at work. I must admit the story I was reading was ok but not great, which probably didn’t help.

I did finish but after a few goes because each time I’d have to give up due to the weight of the device.

Now, I know this is not a true representation as a Kindle is better designed for this.  But I have to admit, I just prefer the feel of holding books.  The ability to add a bookmark, turn the corner down on a page, flick back to check the plot line you have forgotten.  I also like the experience of going in to a shop to read the backs and pick my story.

Now, this might put a total kibosh on anything Phil and I plan to do if we want to publish online, and I will try the whole e-reading thing again but I have to say, when it comes down to reading, I’d rather have a paper version.