It’s all about telling stories

Phil: For the first time in years, I find myself having to give a talk to a room full of people tomorrow. It’s a work gig, not a literary one, but I’ve just remembered something.

I love giving them. Public speaking has never worried me, at least as long as I know what I’m talking about. Unlike my writing friend, I don’t suffer from stage fright. I’ve happily stood in front of a few hundred people using the magic of PowerPoint to entertain them. Generally it goes well. OK, there was this one time, but that’s another story.

Actually writing a talk though, is a bit of a slog. Even drawing up a spider diagram and try to work out the correct order for the slides, and exactly what should be on them doesn’t ease the pain.

Then, I had a brainwave.

First: Open a packet of Maltesers. I need brain food.

Second: The first half of the talk is a story. I’m explaining how I came to be in the hobby I’m talking about. With this in mind, the whole thing becomes easily linear. No need to work out diagrams, just tell the tale. With plenty of photos.

My presentations are always full of photos. The less words there are, the more I can busk it on stage and adjust the talk to the time and audience. And if there is one thing I really hate, it’s a presenter who does no more than read every word off every slide. I can do that, and generally, quicker than they can.

Thinking about this a bit more, most of my job involves telling a story. When I explain how to make something, I take the reader through things step by step until we reach a joyful conclusion. Along the way, there are diversions and even a bit of jeopardy.

In fact, pretty much every form of communication is a sort of storytelling. Maybe they don’t all start “Once upon a time”, but that’s how humans tell each other stuff.

And having been so profound, I better get back to writing my talk…

Seeing the whites of their eyes

Phil: Regular readers of this blog are probably a bit tired of our rattling on about the Stratford Literary Festival, I promise this will be the last time but I can’t resist telling the story from my point of view as you read Candice’s on Tuesday.

I arrived at the venue far too early, or so I thought. It was a cold and damp day and having perused the second-hand bookshops of Stratford, I decided to wander in to take a photo of the attractions board for the day. We were on it and I wanted a record of the fact in case it never happens again.

Seconds after I walked in however, a lovely steward called Gail asked if I was attending one of the sessions. I explained I was but as the bloke at the front. Suddenly I was hauled off to the green room. I protested that I really ought to wait for Candice but to no avail. There I was trapped in a room with cakes and wine – what could I do?

Anyway, there were official photos to be taken and the man with the camera used me to set up the lighting. That’s what he said anyway, it might just be that the dozens of shots were to find one in which I don’t look too stupid. Suffice to say the Nolan was only in the studio for a couple of minutes when she arrived.

My plan had been that we would run through our cue cards before the show. As it was, we got chatting to people and never quite managed this. Time came and were led down to the Drawing Room where we were to perform. As we settled at the front, I was received to see some people arrive in the audience. OK, not many but at least we didn’t have to scuttle off in ignominy.

Now, I’m used to presenting in front of people, but as was said last time, bigger crowds. When there are 50 people staring at you, it’s not possible to focus on a single person, unless they insist on sitting in the front row eating chocolate cake but that’s another story. With a small audience you can see all the reactions at once.

My plan had been to introduce our talk with a short (1min 32s – I timed it in advance) reading from the book that describes the scene where we were told the place was closing. As I did this, I felt myself warming up and had the terror that I was going bright red.

Eventually we settled down and the second problem appeared. The lack of cue card run through meant that neither of us knew when the other was going to stop. Add to that my ability to waffle for England and I had to keep reminding myself to let Candice get a word in. Fortunately, she is more than capable of interjecting and we quickly bounced between us, bantering like we do.

We’d thought that simply talking about us would be dull but as it turns out, people are interested in people. Our attempts to  stick in some stuff about writing as a team hopefully helped the lady who is struggling to complete a novel. Half an hour isn’t long once you get going though so we had to pack everything in. We wanted people to go away feeling they had value for money even though it was free.

Our small audience really enjoyed themselves and we handed out flyers to everyone – if you are reading this because of one, thanks for coming, you made our day!

Afterwards, it was back to the green room to collect our belongings and a bit more chat then we escaped to the HR Coffee bar, supplier of the excellent cakes for a calming cup of tea.

So, we’ve done it. A proper literary festival. They looked after us the same as any of the stars and for a few minutes we felt like real authors. If we one day make it big, part of this is going to be down to Annie and her team running the show. Oh, and Rupert Barnes who took the superb photos of us both in the green room and putting on a show – in which we actually look like real authors. We’ve got a taste for this, now we want more!

Are we famous yet? 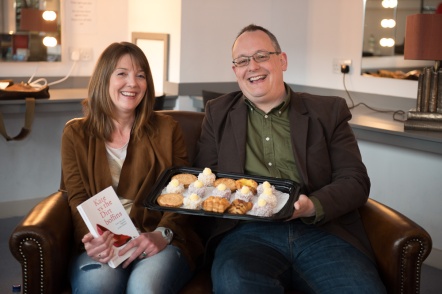 Candice: We came,we saw, we presented.  Yes, last week we set the world alight by talking about our book writing process at the Stratford literary festival. The build up was unnerving, the day was stressful, the cake was plentiful, and the audience was receptive.

It actually went really well, though I was nearly sick before hand. Once I got to the green room and Phil talked at everyone I was nicely distracted.  We didn’t have time to think about what was going to happen as we had our photos taken and then were taken down stairs to the room.

Sitting down at the front was un-nerving, having been to a few events an been in the crowd, suddenly we were the focus.  That is the point when it really hit me we were there to talk about our book.

The crowds flocked in to sit down… all four of them.  I think it made me more relaxed that we didn’t have that many people but Phil said it made him feel more nervous.  He’s used to performing to big crowds!

The talk went really well, we had a few bumps in the road but that just shows we need a little more practice.  But it was great to prove that we can talk for 30 mins about the book in an engaging way. One of our audience said she thought she could see us as a radio show (which backs up what a few people have said).

So, yes the audience was small, we aren’t going to millionaires off that soon, but we did make some good contacts with a book group and WI so hopefully there will be more listeners (and readers) to come.

A great experience and thank you to the Literary Festival for giving us a slot.

Now to sort out the new book cover, that is a whole new area of conversation!