Candice: In the last two weeks I have finished two books. That sounds like a lot but the first one took about six weeks to read and the other around five days. What does that say about the books ?

One was ‘The Bourne Ultimatum’ a book in a series around the Jason Bourne character, though not written by the original author but someone writing in their style. It’s the first Bourne book I have read, though I have seen a few of the films which I did enjoy. They were a less stylish version of Bond with all the thrills and spills, plus lots of near death situations where the protagonist manages to escape. Why do the book take so long to read? Well there were so many plots and sub plots, led by characters with long and confusing names I totally lost track of who was who and what they were trying to do in the end. It doesn’t help when you only read a chapter a night but even when I managed a few hours on it I was still lost. Cut out a few sub plots and it might have made more sense.

That brings me to the other book I read. The other half had bought me ‘ A Street Cat called Bob’ for Christmas. I’d heard of the story but they had also made it in to a film last year that I had hoped to see and didn’t get there. The story is around a recovering drug addict who is befriended by a ginger tom. After finding that this cat seems to be homeless he takes him on as a pet and the story revolves around how, by having Bob around, he decides to really turn his life around, get off the methodone and try to find a proper job. Life isn’t easy on the way, Bob gets ill and other street sellers take offence when the cat becomes such a star in Convent Garden, stealing their tips as they see it.

I really enjoyed this book, though written more like a collection of blogs than a book the story touched a cord, especially as I am a cat lover too and can see how having one in your life could make a difference. Before my daughter came along my cat was my baby !  I romped through each chapter wanting to know what happened to Bob, not his carer. The book finishes quite abruptly leaving me having to buy the next to find out how they moved from street stars to big screen stars.

Learning…less is more.  Keep the story with some twists and turns but not too complicated or you will turn the reader off. 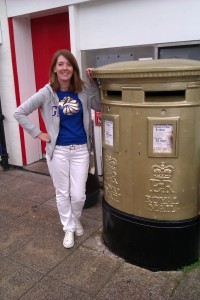 Candice: Yes that says gold, not Goal for those of you in to football.  Think in more of a Spandau Ballet stylie (speaking of which, have been dragged to see them twice and actually had quite a good time but always full of people older than me trying to relive their youth. lots of air punching and arms round shoulders)

Anyway, I posted last week I was on the look out for a gold box postbox.  Well as you can see I found on in Alcester, just down the road.  It’s the box of Nick Skelton, Olympic horsey type person.  Apparently there has been abit of a ho ha about this box, as it’s near Skelton’s house but the town he was born in, Bedworth, Cov, kicked up such a fuss they have one too.

We pulled up on a damp afternoon in the town, nipped out, did the honours and then turned round to find four other groups queuing to do the same.  Hum, I know we are trend setters, but….

According to my friend, this one looks like a gold Dalek.

I then went h

ome and painted my nails in a gold stylie with added crackle effect. So I was really feeling the GOLD rush post Olympics.

Let’s be serious, I wasnt really, I was doing what everyone does.  Procrastinating.   We all do it, and some of us could win an Olympic gold at it.  I have to say I’m not great at getting down to things if I have too much time on my hands.  One small job can fill a day.  But, if I’m busy, I get 10 things done.

There are some great stories in this article on the BBC website, entitled “Epic tales of time wasting“.  Discovered whilst trying to be busy at work (actually not by me I must add).

Ask any writer what they did today, and if they were faced with a lie detector test most would say, “Procrastinated, mainly”.  So here’s to us all finding time to fill the day, and now I’m off to weigh the cat….

PS:  My husband has actually done this while working from home. and emailed me to tell me.

My gentle introduction to chick-lit was “Cat” by Freya North. Of the two books I’d been supplied with, it was bound in the cover least likely to attract adverse attention during the train journey I planned to read it.

Catriona McCabe (28) is a sports journalist who gets a gig covering the Tour de France for the Guardian. The race forms the background and provides the structure for everything. Don’t be fooled into thinking this is a book about cycling though. Despite the (apparently) well researched detail and extensive coverage of the imaginary version for the worlds most famous two-wheeled race, this is a story about one woman trying to get over the failure of a long relationship by escaping into another world, that of the salle de presse that follow the riders around.

Along the way she meets (and shags in surprisingly graphic detail) hunky Dr Ben,  teams up with fellow British journalists Josh and Alex and befriends Rachael, the soigneur for one of the teams. Somewhere in the mix are her sisters Fen (who has her own book from the same author) and Pip as well as uncle Django. There are also too many muscley cycle racers to mention, most with names that my brain refused to remember properly (I had the same problem with War and Peace) but this didn’t seem to affect my enjoyment of the plot.

The first question has to be, did I enjoy it ? Yes I did. The story bounces along at a decent pace. The idea of using each stage of the race as a segment worked very well. Because of the time pressure – the race is three weeks long – a conclusion was always on the horizon. By the final page, all the loose ends had been tied and you could close the cover with a warm glow of satisfaction.

I liked the idea that our protagonist wasn’t just moping about looking for a man, something I was dreading, but actually knew her stuff. It’s woman in a man’s world time but she is written as a true enthusiast armed with a grasp of facts and figures that would probably be more appropriate for one of the statistic-obssessed blokes that sporting endeavors seem to attract. The journalists are often described as being the luckiest fans in the world being paid to write about the sport they would happily pay to watch. The athletes aren’t treated as objects of desire but in a pleasantly objective way. Cat appreciates them as athletes rather than fancying any of them. She wants her favourites to succeed but in a well written manner that will resonate with real-life fans.

One oddity is that you never get the chance to build a mental picture of Cat. The book cover is adorned with a photo of a pretty lady who, in my mind, fits the bill perfectly. I guess that’s the idea but I wonder how that works with the companion volume Fen, the reader might have the wrong image in their head !

While much of the writing is conventional, there is an awful lot of internal dialogue in Cat’s head. I guess this is pure chick-lit. Women want to read about emotions and feelings as much as a straight description of whatever (especially the sex) is going on. Those feelings are in fact the main thrust of the story with the Tour simply taking its place as the stage upon which emotional tale is played out. At some points, the dialogue read almost as though the reader was a character asking Cat how she was feeling. I think this worked for me but it took a little getting used to.

What have I learned ?

Well, comparing Cat and Kate and the dirtboffins I am relieved that it is possible to handle lots of characters without the reader’s mind exploding. We’ve wondered about this in the pub a few times. The two stories adopt a very similar approach with the protagonists internal dilemmas being played out against a background of external events she is involved in. Perhaps we need more of a view into our characters heads and now I have of the female psyche (I’m a bloke and I’ve now read one instruction manual – is there more to learn ?), this is going to be a doddle.