Phil: Sad news this week. One of the countries greatest writers has died. Victoria Wood has died after “a short but brave” battle with cancer aged 62.

Being able to turn her writing hand to comedy and serious work, it’s the funny stuff I’ll certainly remember her for. The temptation is to list all her output, but everyone is doing that.

I remember seeing her live with a crowd from work back in the late 1980s. We roared with laughter, even the blokes, although we had to imagine what the Liletes diagrams actually looked like…

No, just enjoy what I think is the one of the greatest comedy songs ever written and performed. The ballad of Barry and Freda.

Is fictional life too cheap?

Phil: Another new genre for my reading – the crazed psycho murder mystery.

Fireproof by Alex Kava is part of a series based around FBI detective Maggie O’Dell. She’s a criminal profiler and you’ll be unsurprised to learn, has a basket full of personal problems to contend with. In a weird way, it’s a bit chick-litty in that with a failed marriage in her past and a new boyfriend she can’t really open up to on the horizon, the series is almost a search for Mr Right, just with some dead bodies along the way.

It’s the bodies that made me feel uncomfortable.

Thinking about it, I’m not happy with the whole randomness of the death. Everyone who dies appears to be unconnected with the murderer and their murder is just to make a point to someone else.

If you spend your life getting under the skin (not literally, that’s the murderers) of these people, it’s hardly surprising you go nuts.

No, it’s the randomness, the cheapness of life that confuses me. I know they are fictional, but the people on the slab had imaginary lives leading up to a (usually) terrible demise. They grew up with hopes and dreams, snatched away by someone who could have made the same point by scribbling on a Post-it note.

You’re probably thinking I’m a stupid, sensitive soul – I do get that this is fiction and murders make more interesting crime stories than scrumping apples from a tree. One of the few box sets I own is the Inspector Morse series, but with this the murders were rarely random.

In real life, 80% of victims knew their killers. And there were only (only!) 640 in the UK in 2014 – you can see a map of them here if you want. That’s still 128 random killings but compares to 1,713 road deaths over the same period, 398 of whom were pedestrians. Essentially, you are over twice as likely to be run over as randomly murdered. Not forgetting that this 80% is only person knowledge and doesn’t include gang violence where collateral killings take place making the chances of being a victim even lower for “normal” people.

And yes, there is a superstitious part of me that thinks I might be increasing my own chances by writing about the low probability of this.

Basically, random murder is somewhat rarer in real life than it is in fiction. Maybe that’s what makes it so fascinating. I wonder though if spending all your time reading or watching (on films) random murder desensitises the viewer to it all?

All it makes me feel is icky. I think I prefer my books with a happy ending.

Oh, and I worked out whodunnit half way through.

Candice: Has anyone been on a murder mystery night?  I’ve been on one a long time ago for a Hen do.  To be honest we drank too much and couldn’t really keep track of what was going on.

However, Friday night I went to an amateur one, amateur performers but a professionally written play performed by them. The proviso was a wedding where the whole family were there and suddenly in the middle of the performance someone keeled over and died.  It was our job, as a table of 8, to work out who done it.

The deceased was the father of the groom, an obnoxious man who told everyone what he thought of them before keeling over. The rest of the wedding party then came round each table and you were able to ask questions about what you had seen or heard.  This turned into a bit of a bun fight as everyone on the table wanted to ask questions at once (and got progressively worse as they drank more Crabbies Ginger Beer).  At the end we had a conclusion…however it wasn’t the same conclusion across the table!

After a vote we decided on the answer but I didn’t agree, it seemed too obvious to me.  The murderer was supposedly the wife of the deceased, killing him for being cruel to her.  Well, the fact she had her arm in a sling was a bit of a give away.

However, that was the consensus and we went with… and we were right.  Or rather the table was.

But to me it did not ring true.  In my world of plotting, she was too much of an obvious subject and I thought it was some else, some one more subtle.  However, in all my reading and watching these kind of programmes perhaps I am looking for the red herring before the actual culprit.  This show did not break off 10 mins before the end to have an advert break before announcing who the real killer was, which messed up my usual lines of deduction.

So, am I not as good as I thought I was?  Perhaps I’m just better as murder dramas for TV or film, not for entertainment on a Friday night in the local community hall.  Good show though!

I was born too late to write books for children

Phil: It’s no secret that I am not a fan of children. Far too many are badly behaved little pain in the backsides who should be isolated from adults until they learn not to run around a restaurant screaming and stop playing their rubbish music on tinny mobile phone speakers while I am on the bus. That and I’m too old for Lego so I don’t see why they should be allowed to enjoy it.

It turns out though, that in days gone by, I would have been just the person to write for the little darlings. One of the first books aimed at the ankle-biters was Sigimund Feyerabend’s “The Book of Art and Instruction for Young People Filled with Legend and Fables and Folk Tales with Illustrations”. Now that is a title. Imagine how long the book itself is. Back in 1578, presumably youngsters had longer attention spans than today. The lack of TV advertising helped, I can’t see this appearing on CBBes or whatever it is they watch nowadays.

It’s not books with long titles that I wished I’d written. No, I want to terrify the little tykes. Once upon a time, books weren’t merely adjuncts to toy adverts. They were there to improve the minds of the reader. Which is presumably what James Janeway intended when he wrote “A Token for Children: Being an Exact Account of the Conversion, Holy and Exemplary Lives, and Joyful Deaths of Several Young Children.” in 1771.

Not exactly Harry Potter is it ?

You can read the book on-line here. Perhaps as a bed time story for your little darlings. 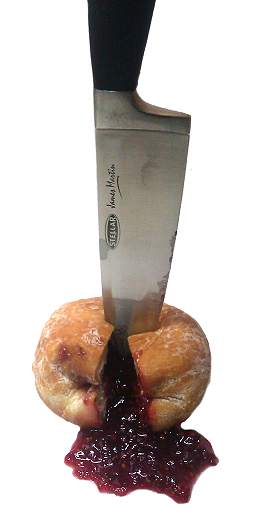 Phil: Embarking on a short story sabbatical, we needed to come up with our first plot line. They, whoever they are, say “Write what you know”. So since we used to work together at a firm where we wanted to kill all our colleagues, a murder seemed appropriate.

Actually, that’s not true, not the murdering the workmates bit, but the reason. It’s more to do with the books we read and especially the TV programmes we watch. Candice mentioned Lost Girl and other top TV shows a few posts ago and as we chatted we briefly considered the realm of fan fiction.

For lots of people this is writing what they know. Get obsessive enough about a single TV show and you could consider that you know more about the characters in it than the people you meet every day. It’s certainly likely that it’s a heck of a lot more interesting than your real life. I know I wouldn’t want to watch me on telly 24 hours a day.

We know the short story needs instant drama and what could be more dramatic than a death ? It might be that this is old hat but we’re just starting with the story thing so why not shoot at the easy target while we get our writing eye in ? More to the point, we could both name TV shows dealing with the subject we enjoyed so there is a demand out there.

Not everything ran smoothly of course. Yes, we bounced ideas around like a tennis ball in a washing machine but on returning to work after our lunchtime chat, I’d had a few ideas in the car. Trying to e-mail them over to Candice, it seems that the e-mail system where she works is set to work against potential killers by rejecting such messages. Not to worry, a little ingenious misspelling sorted that out.

That trick doesn’t stop us being on the receiving end of some very odd looks in the pub when we sit there and talk about methods of implicating two innocent people in the killings of course. If you see the next post starting Prisoner 229544 then you know our excuse wasn’t convincing enough !