Candice: I have finally finished ‘Dominion’ by C J Sansom.  That makes it sound like it was hard work, it wasn’t that bad but 700 pages takes time to read when you are a) falling asleep all the time, b) struggling for time around painting.  I did take it to work last week to read in my lunch break, then someone found me in the coffee shop and that was my reading break gone!

Anyway, the premise of the book is not something new.  It’s 1952 and the Nazi’s won World War II so Britain is running under a treaty from Germany.  It’s a shaky rule as the Brits are struggling with their feelings about it all, especially when the German’s start instructing for all the Jews to be rounded up.

Our protagonist, David, is half Jew but has kept it quiet all his life.  He is also struggling with his relationship as he and his wife lost a son a child a few years before and it has driven a wedge between them.  These two reasons mean he has joined the Resistance movement and with a University friend they are set a task, to rescue their other University friend who is currently in an asylum.  Why?  Because he had a break down after his American based brother told him a secret that could win the war for the Brits/Americans.

I got half way through the book while on holiday and was getting quite into it.  I’m not a historian and couldn’t tell you who was in power at that time and the idiosyncrasies of the war. This probably didn’t help me get into the book but once I understand a bit about the history, I got into the story.  However, once I came home I just lost the thread by reading just 10 or 20 pages a night and by the time it came to the end I thought it was quite poor.  I just didn’t see what it was so important, and I found the characters annoying.

I’ve read another book in the same style, ‘Fatherland‘ by Robert Harris. In fact, I’ve read alot of Robert Harris books and really like his style.  I can remember reading the whole of ‘Pompeii’ on a flight back from Turkey.  I haven’t read anything by CJ Sansom but when I mentioned the name to a colleague she jumped at the chance to read this book as she really liked his other stuff.

So, I’m not going to write this off totally as I think my lack of enjoyment in the end was partly due to the fact I couldn’t give the story the time it deserved, and I also know I am crap at endings.  I find most books a let down as I like to immerse myself in the world and then when it comes to an end I get quite deflated.

So, certainly give Dominion a go but do try Robert Harris if you are into historical drama, both are a good read.

Doctor Who – a response

Candice: I was going to write a review of the book I have finally finished reading – Dominion – tonight.  But after Phil’s Doctor Who rant the other day I’d like to put my two peneth in.

He’s right about Saturday night, but I really have got my anorak out, as one of my friends who is more into Who than me has booked us all tickets to see the episode in the Cinema.  Its funny, ’cause the other half and I have been planning to go for weeks to see “The Butler” after our American experience but as I keep mentioning decorating gets in the way.  So instead we are off to see this at the movies, and will have to fit the film in another time.  I am dying to see who is there, how many people dressed up as the Doctor and other characters.

I have to say I think my mate and I got off lightly when we went to the Experience in the summer.  It was mainly us and a big group of school children.  We let them play with the interactive stuff in the walk through experience part but we did have to have a go at the ‘sound like a dalek’ voice altering machine.  Phil does my description no favours as it was all quite fun but I suppose, partly because I have been behind the scenes of where they film and seen some of the stuff in action the whole part about make up and special effects wasn’t new to me.

But I have to agree with him on the sonic screwdriver.  I don’t remember it so much from the David Tennant episodes (too distracted by him) but I do think the same with Matt Smith.  I don’t feel that the episodes this year have been as strong as earlier ones, and I dont mean back to Tom Baker and the long scarf, I mean more recently.  I have also always been unsure about him as the Doctor.  Anyway, lets see what Saturday night brings, and if there are any interesting characters I’ll take photos! 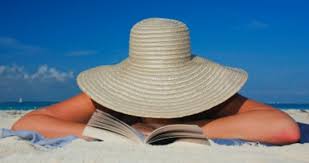 Candice: I’m not going to use this blog to talk baby – there are so many others out there that can do that.  However, I cant ignore the strange things going on at the moment which mean I don’t seem to be in total control of the large but erratic Nolan brain.

I’ve just returned from a lovely two week holiday in America: sight seeing in Washington DC and then chilling on the beach in Fort Lauderdale.  It was really nice to have a break from things put some stuff into perspective after the last few weeks.  What with house move, ever growing bump and work stuff its been all go.  In my blog before I mentioned about reading and having some down time well I did try…  however I have this slight problem at the moment in that every time I try and read I seem to fall asleep.

It’s not necessarily a bad thing, works quite well when you have had a busy day and then need to fall asleep, but when you actually want to read a book its a real bummer.  I managed to get through one and a half books on holiday.  Yes, just that small amount when I had taken four with me, had three flights to fill and lots of beach time.

However, seven hour flight to DC – read about 50 pages of book one, watched a film and mainly chatted to husband.  Time in DC so busy, no time for reading.  Second two hour flight – read some more of book one but full of cold so just slept.  Beach week – read a couple of pages, snooze, read a few more pages, snooze.  Finally finished book one, ‘Buried‘ by Mark Billingham.  Nice police drama, good twist, enjoyed that one.  On to book two.

Well book two is a 700 page tome so maybe I shouldn’t be so hard on myself but I’m only half was through and we had another seven hour flight to fill in the mean time.  Its not that its not a good book, its just I keep dozing off.  I will write a review when I have finished it – its called ‘Dominion’ by C J Sansom.