In search of Fillern Holm. 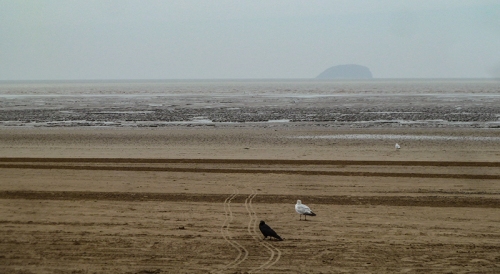 Phil: If you’ve read Kate vs the Navy, you’ll know that the action takes place on an island called Fillern Holm, which can be found in the Bristol Channel, not far from Weston-Super-Mare.

It is of course, completely fictitious. Loosely based on Cockatoo Island in the far more exotic Sydney harbour, we made it up as there isn’t really anywhere suitable to hide an old navy base in the UK, and if we can’t go to Australia, then neither can the characters in our books!

Anyway, I was down in Weston a few days ago and found myself staring out to sea, or at least where the sea should be. On the horizon was a lump, dimly visible through the mist.

Could this be Fillern Holm? Does it exist after all?

Sadly not, it’s actually Steep Holm, according to the map. An uninhabited lump of rock. It was fortified in the 1860s though, and these defences were updated in WWII including the building of a barracks. All this means that it could just be a suitable stand-in for Fillern Holm in any future film or TV adaptions.

Talking of settings for drama, perhaps there is another candidate at Weston. Just off the coast is Birnbeck Pier. 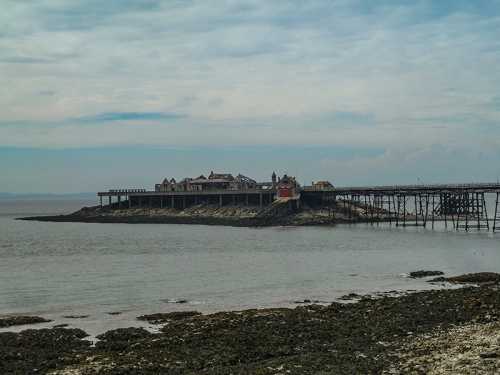 More dereliction, but this time with some buildings. No missing battleships though. Perhaps those will just have to stay in our imagination.

Buy Kate vs the Navy for only 99p from Amazon. 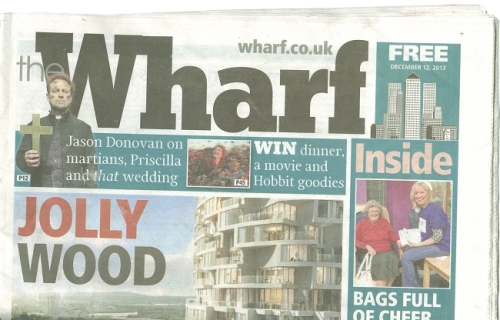 Phil: It’s Crimbo time and in an effort to get festive and find some prezzies, I took a trip down to London.

Our capital is a place that divides opinion. Personally, I love it but mostly because I don’t live there. As an occasional tourist I get to wander around marvelling at sights that are new to me, often without having to be at a particular place at any specific time.

Anyway, I ended up over in the city, specifically Canary Wharf. I know it’s not a normal tourist hotspot but if old buildings along docksides fascinate you, it’s worth a run out along the Docklands Light Railway for a nose. Being Saturday, the piazza surrounding the offices were quiet but I did spot this newspaper in a free paper holder. I’m a bit of a connoisseur of local press so grabbed a copy which a couple of days later I sat down to read.

When I did, I got a surprise. Canary Wharf and its imediate environs aren’t just home to a migrant red-braces clad banking population. There is a real community there. A mixed community of normal people and kids and even pensioners and even some who don’t wear achingly trendy casual clothes or a Saville Row suit. A good example is on page 3 where we have a nativity play performed on the Isle  of Dogs with animals  from Mudchute Farm.

I’ll be honest and say that this wasn’t what I’d expected. A quick trip through the Museum of London Docklands suggested that most “real” people had been displaced by those who could afford multi-million pound apartments. These sort of people tended to exist at work, within their beautifully appointed “cave” and perhaps at one or two of the better sort of restaurants in the immediate area. They feel no affiliation to wherever they live, it’s just convenience.

It appears I was wrong.

Anyway, as far as writing goes, unless you are working on one of those solar-system spanning epic sci-fi novels, it makes sense to base your story in a small area or at least a limited group of people. That way you can crack on with the story without having to explain where the action is taking place all the time. Soap operas are set in a street or a square for this reason.

Tripping over the Wharf makes me wonder if this community wouldn’t make a great location. You have a conflict of locals and incommers, not unlike the town and gown conflicts in Oxford. Limited geography makes research east. A day spent in the shadow of Canary Wharf would probably provide all you need. A little longer might give you a feel for the people who live there.

I feel like a Victorian explorer who has been trekking through the jungle. I’ve discovered there IS life up the Tames. Now I just need to write about it!

If you fancy keeping up with the local news from London Docklands: www.wharf.co.uk

An answer on Birmingham Library 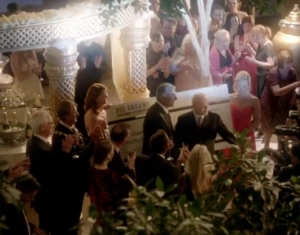 Candice: Last week Phil wrote a post all about the joys and down sides of Birmingham Library.  Can I just add I am NOT a brummie but I am proud of the City I live near and have worked in on and off for years.

Many years ago I worked for the Marketing Department of Birmingham City Council, a hard job you might cry, but my role was to make the people of Birmingham and surrounds use the City Centre facilities.  This involved some random occurrences with Councillors or Heads of Department being put in strange positions to make the best media photos.  It also meant I met alot of B and C list pop acts on their way up the charts – I have to say McFly were probably one of the nicest and Atomic Kitten the worst.

Anyway, this taught me alot about this big city.  Which came in very useful when I moved to my next job working in one of the most iconic buildings in the City: Selfridges.  15,000 spun aluminium disks, did you know?

I think Brum has alot going for me, and I have to say I find it quite offensive that people don’t rate in the same way as Manchester or London.  I really DON’T like London and find the people there very arrogant.

The first episode of a new BBC drama was shown on Sunday, By Any Means.  Filmed in Birmingham it is set in London.  Yes, they do some fancy cross shooting with scenes in Brum intermingled with those from London.  They did the same with Hustle.

Now the bonus is for me that I can get work on this show, as the extras are supplied by the Agency I am with. However, I am confused as to why it can’t be set in Birmingham.  It made me laugh as they chased a suspect down the A435 in Wythall and then cut to them driving round London to their base. The other half and I watch picking out places we know but I really don’t understand why this crack crime squad aren’t searching the streets of Birmingham.  Ah well, as least they didn’t upset the Birmingham City Fans like they did the Arsenal fans over their depiction of them all being thugs!

Phil: I’m going to jump in on Candice’s post to agree wholeheartely about By Any Means. In many ways it was just like watching an episode of The Sain

t from the mid 60s. One minute we were watching some stock footage of an exotic foreign location, next it’s the stuff with actors shot on the back lot at Elstree studios. Here we had stock London footage dropped in to scenes made in Birmingham.

Now I can’t claim to have ties as close as my friend to Brum but even I could recognise a lot of the landmarks. My favourite moment was when the teams van pulled away from its parking spot right next to a Birmingham CCTV and singpost pole – complete with the logo very visible.  Worse, the makers seemed to be obsesed with using very recognisable landmark buildings for major scenes. It’s not like the place is lacking anonymous buildings!

The thing is, why do we have to pretend to be in London at all? Are there no criminals outside the M25 (Insert joke about there being a whole Parliament full within it)?

We’re both quite proud to not be London based. Some of our pitches to publishers make a point of this. Our book contains only two very, very short scenes in the capital. Most people don’t live there so why should they be forced to watch and read about it all the time?