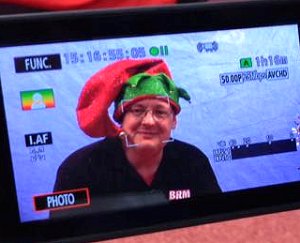 Phil: When the Nolan is away*, the Phil will play.

Christmas has been on my mind this week. I spent a day surrounded by fake trees on Tuesday. There was even an opportunity to wear my elf hat.

The festive season approaches fast and so I need to pull my finger out on the publishing front. We are determined that Kate vs The Dirtboffins is going to be available in some form by the time you are decking the halls with boughs of holly. It’s ready to go and just needs some technical formatting issues sorting out before Candice can launch a multi-million penny advertising campaign to see it on every Kindle out there.

The ability to say, “I’m going to publish” no matter what happens is one of the joys of the modern age. Recent train and tube trips show that e-publishing is freeing authors from the shackles of the big publishing houses. Yes, a paperback is very nice, but the ability to distribute electronic copies takes away all that complicated printing and the need to persuade a bookshop to give space over to your work. No need to drive a van full of paper around either, although I quite like driving vans but then I bet Dan Brown doesn’t do his own deliveries.

So, watch this space. We have a brilliant new cover to show off very soon for a start. In the meantime, if you are looking for something to while away a few hours with some tea and cake then I have another bookazine out, and with the Nolan out of the country I can mention it here without the eye-rolling admonishment at my nerdiness.

The British Railway Modelling guide to building your first model railway will hit WH Smiths magazine racks on October 12th. If you can’t wait (I know you are keen) then it’s available on-line now. I’ve already signed and wrapped a copy for my friend. She’s going to be so pleased. Don’t anyone tell her and spoilt the surprise. 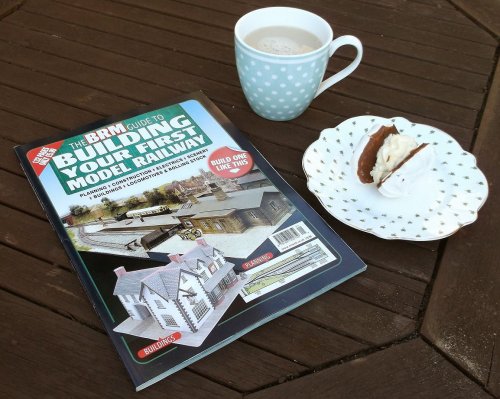 *apparently it’s easier to write when you are somewhere sunny near a swimming pool, or so I’m told… 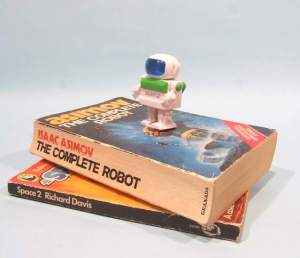 Phil: When Candice mentioned a couple of weeks ago that she’d met someone who write for Starburst magazine and that perhaps we ought to think about some sci-fi short stories, it sent me scurrying for my bookshelf.

While I own a huge number of books, very, very few of them are fiction. Those that are, are probably sci-fi because I like that sort of thing. Ignoring the complete set of Douglas Adams Hitchhikers Guide to the Galaxy books (which I have as well as all the radio series on CD and the TV series on DVD but don’t mention the terrible film) this leaves three books, two of which you see in the photo.

Whatdayaknow ? They are all short stories. Space 1 and 2 are compilations of shorts and the fat book is a collection of all Isaac Asimov’s robot stories.

Which makes me wonder why. I’ve read proper fiction at book length, but I didn’t want to keep it. Chatting this over with the Nolan, we both have the same problem. Reading a book is a voyage of discovery. Once you’ve been through this, a re-read isn’t as much fun. Thus, the books are destined for the charity shop to be replaced with something new but for some reason, I kept these.

As far as science fiction goes though, I’ve never been into the big books. Asimov wrote many short stories but also his magnum opus, the Foundation Series. I tried to read this, but like Frank Herbert’s similar Dune series, I couldn’t get into it. Monumental fiction doesn’t grab me. I’m sure that when you get into it, you love it. I can’t.

It’s not just books either (God this post is making sound really nerdy) but TV too. Start Trek is fine. I can handle the Next Generation of the same. Each episode is a story. Move on to Deep Space 9 or Babylon 5 (I know the later is a different “universe” but the point is the same) with its massive story arc that provides fans with endless hours of internet chat and I really can’t be bothered. These guys aren’t just writing about worlds but entire star systems with a breadth of imagination that makes the Total Perspective Vortex in Hitchikers seem sensible. (For the non-geek, this is a torture device where the victim is shown how unimportant they are in the whole universe. It’s powered by fairy cakes, thus justifying its place on this blog). I prefer to stick to a single species in a story, maybe two if pushed.

Be warned though, giant sci-fi can catch you when you least expect it. As a youth, I dabbled with the Perry Rhodan series of pulp fiction books. I foolishly thought I could read the set but then discovered that this German (translated into English, I’m not that clever) series actually ran to more volumes than there are people on the planet. When you find number 136 on the shelf of a bookshop, you get the message that there is more to this than you thought. My excuse is that I was introduced gradually with some fun stories and found myself hooked…

Anyway, I’ve re-read some of the books and you know what ? They are pretty good. Not too geeky – good sci-fi takes a real plot line and simply transfers it to a fantastic location or time – and very interesting. If nothing else, all this has made me re-discover some excellent writing.