Say it with Triffids 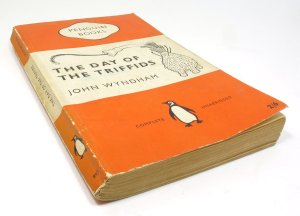 Phil: Back in August I mentioned that I’d never read John Wyndham’s book “The Day of the Triffids”. It was in a list of classic novels I felt I should read one day.

Browsing the shelves of a second-hand bookshop a few weeks later, I bought a copy for the princely sum of £2. Only 5 months later, I’ve managed to read it.

Long version: Even if you’ve not read the book, most people are aware of the basic story. A meteor shower (or is it?) blinds most of the population. Our hero isn’t affected thanks to a spell in hospital and has to escape London and try to survive.

Compounding the problems are the Triffids – mobile, carnivorous plants. Blind people are easy prey for their deadly stings.

The key to the book is a good, solid concept. The idea of a world full of blind people is bad enough but when they are being hunted by killer plants then you’ve really stoked up the terror. Stoked it up enough that we don’t bother to question the absurdity of walking, thinking, plants.

Of course the horror doesn’t end there. With the reader imagining themselves in the position of the hero, they then have to understand some terrible decisions that have to be taken. You can’t save a city full of blind people. One character tries – he captures some of the sighted and attaches them to groups of ten sightless people with the idea that they will act as the eyes for the group to help them scavenge for supplies.

The awful thing is that even he has to realise that this isn’t a practical option. You really do have to switch off your compassion and abandon people to their fate. Perhaps this was too shocking even for Wyndham as a mysterious plague appears to kill off the population rather than contemplate leaving them to a slow death from starvation or to be killed and eaten by the triffids.

What we have is a fight to survive. A fight that involves a great deal of practical work. Sad as it sounds, I like to think I’d be good in this sort of situation. When society has collapsed then you want someone who can make a shelter. Not that I have any desire to find out, but it’s impossible to read a book like this and not wonder how you would cope.

At 272 pages, this isn’t a long book but it doesn’t need to be. There are twists and turns along the way. The action takes place over a long enough period that the world gradually changes too. Towards the end we begin to wonder just how long the survivors can hold out.

Written in 1951, it hasn’t dated too badly either. Maybe the female characters are of their time – one is admonished for claiming that starting up a generator is something women could never do. That’s quite an achievement on its own, although perhaps life was simpler then, and the temptation to introduce elements that would seem old-fashioned today wasn’t so great.

An excellent read. You might need something funny to cheer you up afterwards though. Perhaps some comedy romance?

Be careful of Publishers – all may not be as it seems

Candice: I’m not a follower of ‘vloggers’ but I am aware there are a few out there who have a massive following for their You Tube films.  One is called Zoella and she mainly posts beauty blogs, but it seems she’s also written a fiction book. Or has she…

Released a few weeks ago and expected to be Christmas number one, the book about a being a teenager in the social media world has been warmly received. However, all is not as it seems, as Zoella has admitted that she didn’t actually write the book, she came up with concept and the team at Penguin put it together.

Now she wouldn’t be the first or last ‘celebrity’ to have help with a novel. Some of them can’t even string together a sentence, let alone 80,000 words.  But I think the hoo harr with this is whether she tried to pull the wool over anyone’s eyes. She insists she mentioned this in her publicity but it seems that might not have been the case.  So she’s taking a break from the social media world for a while to deal with the backlash.

I’m in two minds about this story.  Part of me is pissed off with anyone who gets away with being published by doing no work at all.  It’s a bit like X Factor contestants or Big Brother winners.  They don’t really have a talent apart for promoting themselves, yet that allows them a level of celebrity. These are Phil’s personal bugbears (Tess Daly included).

But, if I read into some of these stories I think this 24 year old has been taken over by the corporate band wagon.  I’m sure she has some ideas in her head, she can’t have got 6 million followers for nothing, but I would think the people at Penguin saw money and said ‘Don’t worry love, we can put this together’ rubbing their hands at the thought of the sales.  Unfortunately, she’s the one who has to deal with the backlash.

We’ve spoken to Polly Courtney alot and she almost got sucked by the same thing when she had a traditional publishing deal, but being an older, stronger character she knew when she was being made a fool of.

My advice to Zoella is take this time to really write book two and prove everyone wrong.