Telling the story in different media 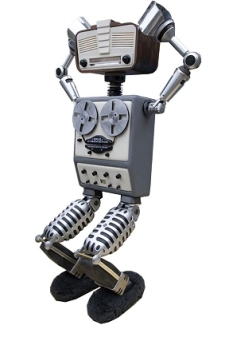 Phil: Last week I went to see The Hitchikers Guide to the Galaxy Radio Show.

It was, quite frankly, brilliant. If you know the radio version and get the chance, go and see it. You don’t have to dress up in an Arthur Dent dressing gown (about half a dozen did) or take a towel (a few more) but it’s a great night out with the real cast. Apart from the ones who are dead obviously, but the replacements are very good although Miriam Margolyes was perhaps a bit to thespy for the book compared to the Peter Jones original.

What has this to do with writing books?

Well, Hitchikers exists in lots of different media. To date these are:

Each version of the story is the same. But different. For example, in the radio and book versions you can have characters that change shape on a spaceship. The BBC might have been able to solve the problem of a character with two heads in 1980, but they baulked at this so Douglas Adams wrote a version that was filmable within the budget and technical possibilities.

The terrible, terrible film is written by morons and we shall talk no more about it.

On stage, most of the effects you might require for a show aren’t possible. Space is Big, really big after all. So the adaptors cherry picked elements from the story and strung them together in a way that told the story but could be realised live. To be honest, doing as though the cast were recording a radio show but with special effects and costumes was a genius move too.

The computer games is probably the most interesting. Although it follows the main story, since you play the role of Arthur Dent (the main character) it behaves differently. You can explore the world in much greater detail than is possible in a normal narrative. For example, it’s important to look under the bed in the game but we never get to do this in radio, book or TV series. Of course if you are in control, doing this is interesting. On the page, who cares unless it is essential to the story?

What you have to do is make best use of the media to tell the story in the best way possible. The story is the backbone of everything, and if it’s rubbish no amount of budget, bells or whistles will make it better. Start with a good ‘un and you can’t go far wrong. Well unless you produce the second worst film in existence, but I said I wouldn’t talk about that.

Is this relevant to team nolanparker?

Maybe. At one of the places I work (portfolio career, I do lots of things now) one of the guys is a screenwriter. A proper one who’s been on courses and everything. He’s working on a secret screenplay at the moment that stands a good chance of getting him, what he describes as the Holy Grail, a credit on a film. Chatting in the pub a couple of weeks ago, I mentioned that we had written a great book. I generously suggested that if he could bag us a film deal, the adapting credit was his.

I guess we just have to sit back and wait.

The thing is I can see how The Book would work on the screen. Both Candice and I write by imagining the scene in our heads. We have a pretty good idea what the characters look like. We even, after a little discussion a few weeks ago, have the perfect role for Michael Palin. So perfect in fact that I really want to make this happen before he gets too old to drive a tractor!

In the past we’ve even discussed a stage show. Like Hitchikers, we can’t do the thing as a play. Instead, we have an idea about starting with a reading of a few paragraphs and then getting on with the story of how we came to get into writing. There will be much banter at each others expense. One of use will make numerous costume changes and we’ll even have time for a bit of Q&A at the end before shuffling the audience out to do a quick book signing.

Maybe Douglas Adams started something. Is the future one story but spewed out over lots of media?