Happy Birthday Billy. I’m not going to read your stuff. 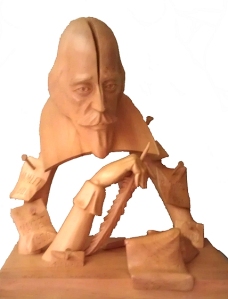 Phil: Living so close to Stratford-upon-Avon, we are both pretty well versed in William Shakespeare. There have been occasional lunchtime meet-ups opposite the birthplace trust. If we put down our over-priced paninis and peered over the crowds of tourists, we could see the place the great man was born. Inspiring or what.

Next week, we’ll be doing the literary thing ourselves by enjoying several events as part of the annual festival. You can tell the ones we’re going to, cake is included in the ticket price.

Anyway, yesterday was his 450th birthday and as you can imagine, the world has gone literary mad. There are people quoting him all over the news. Poor Yorick, that fellow of infinite jest, is being alas’ed by thespians waving skulls around. Kingdoms are being offered for horses and there are more than 2 be’s floating around, or maybe there aren’t 2 b’s…

I’m sure there is someone thundering about a lack of Shakespeare on the school syllabus and demanding that children should be forced to read all his great works.  Here, I beg to differ. Not because the thundering will be from the sort of rent-a-quote idiot who local TV producers seem to be able to produce at a moments notice. No. It’s because they are, for the most part, wrong.

A Shakespeare play is just that – a play.

I’ve enjoyed a few nights watching the great man’s work performed. The plots are a bit duff in some cases (an identical brother and sister?) but generally the comedies at least are good fun. But only when seen on stage performed well. You need to give it a few minutes to tune in to the language but I defy anyone not to find at least some of A Midsummer Night’s Dream funny.

(Be you new to the bard on stage, I suggest that if in Stratford go for the Swan Theatre rather than the main auditorium, if elsewhere, try to catch the Oddsocks Theatre Company performing something as it’s always brilliant and often outside so you can take a picnic.)

Reading the stuff on the page sucks the life out of it. These weren’t written as great literature. Those who treat them this way forget that they were originally performed to the sort of people who would now enjoy Eastenders or Coronation Street. They were entertainment.

The moral – plays and books are different things. When it comes time to turn our book in to a blockbuster film, we’ll do rather more than hand copies to the actors and tell them to read it out.

Update: I wrote this yesterday, but in the news today, Dame Helen Mirren agrees with me, and you don’t mess with the Mirren.

Candice: We’ve had a great summer in the UK and then all of a sudden, on the 1st of September, autumn has hit.  We are still getting lovely days but the nights are drawing in, it’s colder so I’ve had to put the heating on for a few hours each night.

However, this does bode to a time of year when more reading might be done as people draw round the fire, and have more time to sit as they feel less inclined to do things as it gets dark outside.  I was moaning the other week about not having had anything to read recently, well I’ve gone the other way and now have three books to read but don’t seem to have had time to read them so this might be a my chance.  Of course, come January I’ll had loads of time on my hand (!) to do lots of reading.

Well this weekend the other half and I having a well deserved break from the decorating and general house sorting for our five year wedding anniversary.  Thinking about the weather, five years ago it was absolutely throwing it down all this week but the sun shone on our day, then the UK had a heat wave while we were on honeymoon – so there is always hope for one last trip out for the shorts.

So, the other week I got an email from Warwick Words, another local literary festival.  Warwickshire must be a popular area for this, I suppose due to our Shakespearean roots?  Anyway, it’s a about their Autumn Festival, just a few events over the first weekend of October to whet your appetite for next year.  Phil, being Phil, fancies the Pun Run,  “the only pun and wordplay-based comedy club in the UK”, I also think this sounds interesting but it happens to be on a day when I am away.  However, if we want to keep up the comedy vibe then ” An evening with Mark Watson” is the way to go.  He’s not a comedian I know but it sounds like he is also a prolific writer so we could have a laugh and learn some stuff too.

Have a look, there might be something you fancy.