Candice:  I think Phil and I would both agree that we are struggling at the moment.  We’ve had pockets this year where we’ve had time on our hands (me more than him for a change) to really get on with some writing stuff.

We’ve chatted, sat in Libraries and written and I’ve tried to get Instagram off the ground, again.  But it’s all come to not a lot at the moment as he has been overtaken by train shows and me a full-time job (again).

Where do we go from here?  At the moment I feel like we keep creating promises we can’t keep.  Part of the problem is the only people who we are making the promises to are each other, and if we don’t prod each other than everything goes to pot.  We’ve always said that the writing partnership drives us in a way that writing on our own just wouldn’t. But currently, even that extra support is failing.

I’ve been through beating myself up for it.  I’m still the person in the office that people say – ‘You do that and that and that…!’.  Well yes, but sometimes I’ve over-egged my pudding, overstuffed my diary and actually there is no time for me!

I’ve been in trying to get to grips with my new commute and how that works with childcare and exercise.  Luckily, though my current workplace has got rid of the swimming pool (sad face) I can still go for a 5km run in my lunch break once a week which helps the mental and physical health.  However, with short, dark days, getting up and going home is hard work, especially when it takes you over an hour to do the commute. Writing time just doesn’t feature.

Phil’s been busy doing shows and writing articles, his workload never ends either, though it doesn’t involve those trips to the gym which are important to me!

We are meeting on Friday and I’ve decided to put a stake in the sand and say ‘What are we doing?”  We haven’t put a new book out in years and we’ve also been experimenting with mentoring.  We need to pick one idea and stick with it, as we just don’t have the time to do it all and instead we are doing things piecemeal and not doing any of them well.

I’ve plumped for finishing Book 3.  There is some cracking stuff in there and I want to get it out there.  Phil – well I don’t know his thoughts.  If you hear about fights in Birmingham on Friday it might be us.

Demon Seed – so good he wrote it twice?

Phil: An odd one this. Heading into my local library in search of something to read, I spotted a book called Demon Seed on the shelf.

I knew of the film and decided to give the original version a go.

In the first chapter, there is mention of both the Internet and the World Wide Web. “Hold on”, I think, “I’m pretty sure the film was made back in the 1970s. How come we have talk of things not developed until the late 1990s?”

The plot revolves around a sentient computer program, so some sort of moving around the world’s networks is fine, but I’m pretty sure that neither term was in common us back then.

To Wikipedia, I head and I’m right about the film, it was released in 1977. Assuming the book predates the film then how does the author know about the web?

Well, a little more digging and it turns out that Dean Koontz has written the book twice. Once in 1973 and again in 1997.

All is explained at the end of the novel. Koontz simply says he didn’t think the original was very good so decided to have another crack at it. This allowed him to add in all those future references to computing technology.

I wonder how he pitched it to the publisher though. “You remember that great book I wrote years ago? I’d like to do it again and see if people buy another copy to find out what I’ve changed.”

Is it a brave move to decided that the story you are best known for isn’t good enough, or a cynical one to cash in?

I suppose I ought to say whether I enjoyed the book. Not much. All the talk of the computer controlling Susan, the main character, made me very uncomfortable. There’s also a fairly graphic murder of an innocent man as well as passing mention of several others. Not my thing at all, but then we’ve mentioned I’m a bit of a wuss about these things in the past.

The Muse by Jessie Burton 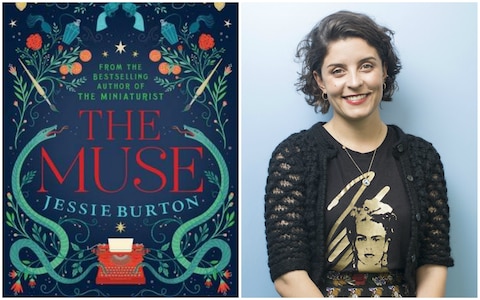 Candice : I’ve just come back from a lovely week sunning myself in Gran Canaria.  The holiday hit all the usual Nolan criteria – sun, tick (though it took a day or so to appear), pool tick, mini disco, tick and happy child, tick.

We’ve been to Gran Canaria before when she was a bit younger, and I’ve also been when I was hitting the club 18-30 world.  Its a great for guaranteed sun but, to be the honest, its a bit characterless.  Being a volcanic island, they have to import sand from the Sahara to make the beaches yellow not black and its so small you can get from one side to the other in about an hour.  The other half and I discussed holiday options for our next trip and decided we wanted more character – but that’s another post for another time.

However, the sun and pool options meant that I did have time to crack open the odd book and get on with some reading.  I’d struggled to have time to pop somewhere to get a book before this hols so had ordered some of Amazon.  Its harder to pick that way because you do need to have an idea of what you want to read or an author in mind.  I picked Jessie as I’d read ‘The Miniaturist‘ the other year and had really enjoyed it.  It was quirky and different, not my usual read but I was hooked all the way through the twists and turns of the strange story.

‘The Muse’ was similar.  A strange premise of a woman who comes across a painting which has a complicated history.  Set in the 30s and 60s the story twists between the discovery of the painting and the actual painting of it.  But its more than that as it touches on what it is like to be a person of colour in the UK when that is frowned upon, the impact of war on a country and how deceit leads people to do strange things.

In brief, Odelle comes to the UK from Trinidad, degree educated she struggles to find a job until she is taken under the wing of Marjorie, second in command at prestigious art gallery.  Odelle meets Lawrie, who’s once rich family are now struggling after the death of his mother, he has been only left a painting in her will.

The painting weaves a tale of a Foreign diplomat and Art Seller in war besieged Spain, where his wife and daughter are trying to fit in.  His wife struggles with depression, his daughter a gifted artist who is ignored by her father.

The daughter falls for one of the servants who is also an artist and through a twist of fate (orchestrated by the artist’s sister) her painting is represented as his to her father.  Fame and fortune follow for the man, but he doesn’t want to take the glory of his girlfriend’s work.

War breaks, and the family and artist are separated and some end up back in the UK, with the final painting in their possession.

When Lawrie shows the painting to the gallery it causes uproar, an undiscovered work by this celebrated artist.  But all is not as it seems and Majorie becomes cagey, Odelle thinks she is hiding something about the painting.

The story twists and turns nicely, with an added plot twist I thought I’d worked out but wasn’t quite what I expected.  The book is well written, and unlike other stories where it moves from different story lines I didn’t struggle to keep up with who is who.

Being able to read it over a few days definitely helped but one to recommend.

Where do character names come from? Is that me?

Phil: Where do the names of your characters come from?

I was idly flicking through Jack the Station Cat and the Snail Trail recently, when I spotted that one of the characters was Mr Parker.

That’s odd, I thought. Could that be me?

I’m not sure when author Alan Cliff wrote this book, but we have corresponded by e-mail a while ago on one of his non-fiction books. Maybe he was searching for names and our chat inspired him to pluck mine out of mid-air.

I suppose I could ask, but I think I’ll just stick with the warm feeling that it might be me.