Step away from the hovercraft… 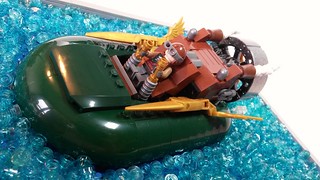 Phil: Our latest luncheon meet-up was notable for a couple of things.

First, the queue for the cake was so long and slow-moving that I had to settle for a baguette that was delicious, but the same colour as my shoe.

Second, we came up with a significant new addition to the text that both fills a hole in the story and provides a chance to add more funny stuff. Because of that, writing the first draft falls to me. I’m researching at the moment.

In the meantime, I’ve been reading a book about hovercraft. I’m fascinated by them having managed to take a ride across the channel and back the weekend before they were taken out of service back in 2000.

From this, I discover there was a hovercraft development site not very far from the fictional island we’ve set Kate vs the Navy on.

This sets me thinking, can I include this in the story? There is a definite place for it if I changed a boat into a hovercraft. There would even be some logic to the change.

But then I realised that appealing as the idea was, I’d need to make more and more changes to the existing text and most of these would add nothing other than the chance to satisfy my love of hovercraft. That’s not a good reason to mess around. Worse, as hovercraft are much harder to control than boats, there would be a definite credibility gap at a crucial point. Not perhaps one that many people would spot, but if I were a reader, it would annoy me and you don’t want to annoy your reader.

I guess the lesson to be learned is that you can’t cram all the ideas you have into a book. The secret is to assemble the best ones and learn to put the others back in the box for another day.

No libraries = No Terry Pratchett

Phil: This week’s blog post was set to be something whimsical and lightweight. Then I sat in my hotel room on Saturday night after a couple of bottles of pomegranate and strawberry cider washing down a rather nice curry, and flipped on the telly.

Terry Pratchett – Back in Black tells the author’s life story. Paul Kaye plays pTerry (as his fans call him) and along the way we meet both famous and non-famous readers. We see how the literary establishment hated his books complete with a cringeworthy clip from a review show that those taking part will probably wish to forget, and later decided he was A. Good. Thing. Along with another clip of more literary people saying this.

I’ve tried but failed to read Pratchett. I ought to love it but I can’t find a way in. It doesn’t matter, the documentary is brilliant, affecting and a superb celebration of the man.

What struck me was that before he wrote, he read. Everything. Well, everything in his local library starting with fantasy and then history, “Blokes in helmets bashing each other” as he described it. Reading planted all the seeds for the character in his stories.

This week, I read in my local paper that our council is making more cuts. Headlines are those for old people or children but tucked away are libraries – again.

I’ve said before how my local library was essential for my development. I’m not going to compare myself with Pratchett but to lift a line from the documentary, I’m a human. He is a human. My poo stinks. His poo stinks. I loved my library. He loved his library. He is a writer. I want to be a writer.

Does it matter if we deny kids the chance to wallow in reading? Probably not. After all, do we need people with imagination?

Sorry, I’m ranting. Go and watch the programme on iPlayer while you have a the chance. Just keep some tissues handy…

Candice: In the last two weeks I have finished two books. That sounds like a lot but the first one took about six weeks to read and the other around five days. What does that say about the books ?

One was ‘The Bourne Ultimatum’ a book in a series around the Jason Bourne character, though not written by the original author but someone writing in their style. It’s the first Bourne book I have read, though I have seen a few of the films which I did enjoy. They were a less stylish version of Bond with all the thrills and spills, plus lots of near death situations where the protagonist manages to escape. Why do the book take so long to read? Well there were so many plots and sub plots, led by characters with long and confusing names I totally lost track of who was who and what they were trying to do in the end. It doesn’t help when you only read a chapter a night but even when I managed a few hours on it I was still lost. Cut out a few sub plots and it might have made more sense.

That brings me to the other book I read. The other half had bought me ‘ A Street Cat called Bob’ for Christmas. I’d heard of the story but they had also made it in to a film last year that I had hoped to see and didn’t get there. The story is around a recovering drug addict who is befriended by a ginger tom. After finding that this cat seems to be homeless he takes him on as a pet and the story revolves around how, by having Bob around, he decides to really turn his life around, get off the methodone and try to find a proper job. Life isn’t easy on the way, Bob gets ill and other street sellers take offence when the cat becomes such a star in Convent Garden, stealing their tips as they see it.

I really enjoyed this book, though written more like a collection of blogs than a book the story touched a cord, especially as I am a cat lover too and can see how having one in your life could make a difference. Before my daughter came along my cat was my baby !  I romped through each chapter wanting to know what happened to Bob, not his carer. The book finishes quite abruptly leaving me having to buy the next to find out how they moved from street stars to big screen stars.

Learning…less is more.  Keep the story with some twists and turns but not too complicated or you will turn the reader off.

Playing with your imagination

Phil: Imagination. We’ve all got it, but adults have it sucked out of us if we aren’t careful.

I’m reminded of this as I was strolling around the London Toy Fair last week. While I was carefully looking for items for a couple of magazines who had commissioned coverage from me, being a big kid, I couldn’t resist taking a peek at some of the other goodies there.

Both Candice and I were Lego fans as children. We have similar stories of towns built and played with. Both remember the lives that our tiny plastic people lived in our minds.  I know that this is a direction Nolan Junior will be encouraged in.

Looking around the show, there were plenty of toys that did very little. Lots of “collectables” for sticking on a shelf too.

Mostly though, there were toys you could make up stories for. Figures could leap in and out of wooden trains, boats and cars or go for a ride for adventure.

Children don’t worry so much about realism either. Why shouldn’t a wooden train set be set in medieval time? And if it is, why shouldn’t a dragon pop its baby in a goods wagon for a ride?

It all looks like good fun to me. Far better than plonking the youngster in front of a television. That way leads to a world where you think an Excel spreadsheet is entertainment!

Grown-ups are normally deprived of purple dragons but writing is a socially acceptable way to give your imagination muscles a bit of a workout. Daydream for a bit but get yourself a keyboard or a pen and starts jotting things down. Once you get going, it’s addictive.

Now, if you’ll excuse me, I need to go and add a bit to a story…